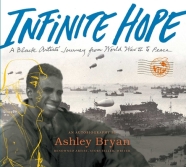 The importance of diverse children’s books cannot be overstated. Many readers and educators know that when they were growing up, children’s books were about one group of people — young, white, Christian people. And while I loved reading, I don’t remember reading one book about a young Jewish girl, much less anyone of color. That is gradually changing. And there are some great recent releases of children’s books for classroom teachers and librarians and parents to consider adding to their collections.

“Equality’s Call: The Story of Voting Rights in America” by Deborah Hiesen and illustrated by Magdalena Mora is reminiscent of “Lillian’s Right to Vote” by Jonah Winter. In “Equality’s Call,” the story begins with the founding of America. In rhyming text, readers learn that not everyone was allowed to vote back then. Cleverly, there is a repeating four-line refrain throughout the story. Three of those lines that are repeated exactly while the first line changes ever so slightly as the story progresses. It begins:
“But we heard in the distance
Equality’s call:
A right isn’t right
Till it’s granted to all.”
Readers learn about voter suppression, about women getting the vote and about the Civil Rights Act of 1964. The importance of each and every vote is stressed by text stating that every time a person (who was previously disenfranchised) votes, it’s an act that acknowledges the past and the fight to have that right. At the end there are several pages of information, including Voting-Related Amendments & Legislation and Voting Rights Activists. (Beach Lane Books)

“Counting the Stars: The Story of Katherine Johnson, NASA Mathematician” by Lesa 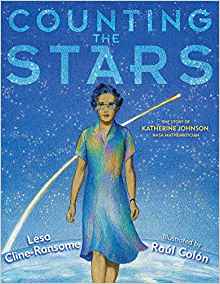 Cline-Ransome and Raúl Colón is the picture book story of Katherine Johnson, who was one of the main characters in the movie “Hidden Figures.” Katherine Johnson recently published her autobiography, “Reaching for the Moon,” which is the middle grade version of this picture book. It’s the story that many of us are familiar with, how a brilliant Katherine sped through school and college, a math whiz, but was unable to find a job truly worthy of her math ability until she got hired at NASA as a math “computer.” This picture book version of Johnson’s life omits much of the information in her autobiography about discrimination and sexism, but instead concentrates on Johnson’s determination to be involved and do things the right way – including her insistence that she attend meetings and conversations previously only attended by the male engineers at NASA. Colón’s illustrations are in his unique style — brilliant colors with an emphasis on blues and greens. They are also the perfect complement to the paragraphs of text on each page. Taken together, the text and the illustrations make this an important picture book to have in school and classroom libraries as well as in home collections. (Simon & Schuster)

“Infinite Hope: A Black Artist’s Journey from World War II to Peace” is an autobiography by Ashley Bryan. This ingeniously created book is filled with text, sketches, paintings, maps, photos and other artifacts from Bryan’s life. The story concentrates on Bryan’s experiences in the military, both in the US and in Europe, the discrimination he (and others of color) faced and the determination he showed in his continuous effort to work on his artistic talent. This is not a picture book for young readers, but rather for readers in middle school, high school, and adults. All those readers will be entranced by the quality of the images and the simple but expressive text outlining the events in the war and his part in it all. The effective text states what was obvious to the troops of color: “The few Black soldiers who had been promoted to lieutenants out of necessity during the war were not allowed in the officers’ facilities or clubs, despite having the same responsibilities as the white officers. We Blacks had risked our lives — thousands had lost their lives — to stop Nazism from spreading, to stop the Nazis’ hatred and agenda of eliminating those people they had segregated out, deemed as lesser, as unworthy. And yet in many respects we were being treated in the same way…Where was our freedom? Our equality?” (Unstated in the text is that Hitler partially based his policy of segregation on what he saw Americans doing to people of color.) The editing of this 100-plus page book was carefully done to include excerpts from letters, drawings, and color paintings to make every page practically a work of art in itself through the combination of the images and the text. The endpapers are colorful Monet-like paintings of flowers which certainly bring to mind the “peace” part of the story. (Atheneum Books for Young Readers)

“Discovering History’s Heroes: Ida B. Wells, Righter for Justice” by Diane Bailey is a

chapter book about the life of Ida B. Wells. Wells was born a slave in Mississippi, and as the book explains, she was lucky that her parents were owned by an architect. They didn’t have to work in fields, but were a carpenter and cook. While their owner treated them well and did not beat them, they were not free. When the family was freed after the war ended, her parents continued to work for their former master, but now for wages. This ended when her father voted against the wishes of his former owner. Ida was able to attend school, which was important because when she turned sixteen and her parents succumbed to the yellow fever epidemic, she got a job teaching to care for her younger siblings. The book illustrates that throughout Wells’ life, she always tried to do the right thing, no matter the personal cost. She sued the railroad for discrimination when she wasn’t allowed to ride in the ladies’ car but was told she needed to go to the “colored” coach where men went to drink and smoke. She ended up losing but kept her determination to try to make things fair. She wrote about injustice and aired wrongs in public. “The way to right wrongs is to turn the light of truth upon them,” is what Wells said and what spurred her on throughout her inspirational life. (Simon & Schuster Children’s)