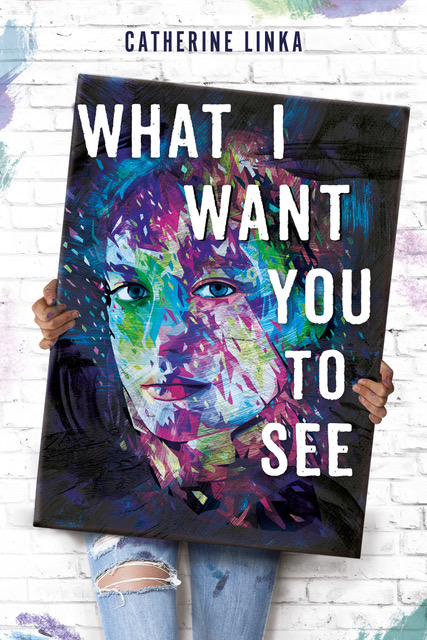 “What I Want You to See” by Catherine Linka is a story about Sabine, an art student whose life has been anything but ordinary and privileged — and is about to get a lot more difficult. Sabine had lost her mother the previous year, and while she lived with her best friend for a while, she was also homeless for part of that time.

Now she’s won the Zoich scholarship for merit, so she’s able to attend CALINVA, the California Institute for the Visual Arts, but she works part time jobs to pay for her rent and food and art supplies.

Sabine has a lot of baggage. Her mother died suddenly and her mom’s employer, a wealthy, spoiled, reality TV actress, was heartless. Sabine and her mother had lived in an apartment over the actress’s garage, but when Sabine returned to the house after her mother’s death, all their belongings had been boxed up, and Sabine was left with nowhere to go and no one to rely on. She had the actress’s designer gown and expensive boots in her car because she had picked them up after cleaning and repair as a favor to her mother right before the fatal accident, and that eventually causes a problem for Sabine.

She is alone in the world, and that makes her vulnerable. When the artist/professor that she adored, Collin Krell, is cruel to her in the class she takes with him, Sabine is crushed, especially when he seems pointedly harsher with her than with other students. So when an older grad student, Adam, befriends her and seems to really understand how much she is starting to hate Krell, she feels that someone is on her side — finally. And Adam hates Krell just as much as Sabine does. He tells her that Krell never wanted her to get the scholarship in the first place and that he resents that his first choice, another student, didn’t get it.

In fact, when Krell advises Sabine to find an artist she admires and copy that person’s work for practice, Adam tells her that he can let her into Krell’s studio so she can copy Krell’s new painting. It’s a painting that no one has seen, and which has sold for almost a million dollars sight unseen. But Adam works part time cleaning the studios and has keys to all the rooms. Sabine is afraid that if she were to ask Krell for permission to copy his painting, she wouldn’t get it because he hates her. And while she hates Krell for his cutting comments about her art, she loves his artistic talent.

So Sabine copies the painting. But things with Adam don’t quite add up. And she’s growing more fond of Kevin, another student in her class. She’s also tired of keeping secrets from her friends about her past, her mother, and her stint being homeless. Ironically, a homeless woman Sabine meets seems to understand her better than her friends. She feels a connection with Julie, whom she sees often, and she decides to paint her.

When the copy of Krell’s painting is almost done, Sabine tells Adam she is done copying it. She has realized that Krell supports her more than she had thought, and she feels guilty about having copied the painting in secret unbeknownst to Krell. But Adam disappears, and the painting Sabine copied is gone. Sabine is frantic, and she doesn’t know what to do. She’s told no one about it, and if there is something nefarious going on, who would believe that she had an innocent reason for sneaking into Krell’s studio and copying his painting?

Linka manages to keep us at the edge of our seats as we frantically turn the pages to see what is going to happen next. The action is compelling, and while at times, we want to shake Sabine and tell her she’s an idiot, we feel for her terrible situation and her dumb mistakes. She trusted the wrong person — will her life be ruined because of that one mistake?

Mystery lovers will really enjoy this one, and the details about art and painting make it even more interesting. The characters are relatable, the story compelling, and the writing strong. What more could anyone ask for?

Please note: This review is based on the final, hardcover book provided by the publisher, Freeform Books, for review purposes.