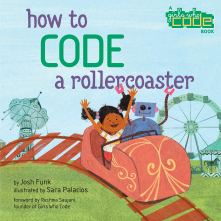 What better way to introduce children to the language and ideas behind computer coding (or just codes in general) than by reading picture books that combine real information with a bit of story-telling to inform and entertain.

lively story about Pearl, who visits an amusement park with her robot, Pascal. This brightly illustrated picture book introduces kids to the language of computers. Readers learn what words like “loop,” “code,” “variable,” and “value” mean. In fact, they also learn computer reasoning like true and false and “if-then-else.” Adults just might learn a bit about computer programming from this quick, interesting read. The author knows what he writes about because he’s a software engineer. This is not his first picture book. (Viking) 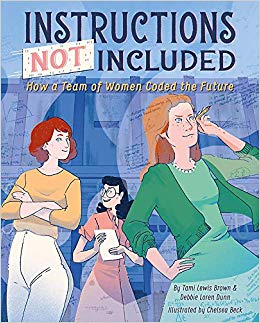 “Instructions NOT Included: How a Team of Women Coded the Future” by Tami Lewis Brown and Debbie Loren Dunn is the story of three women who loved math and, because of World War II, were able to get jobs traditionally given to men. The trio programed the first computer, ENIAC. They had no guidance and no instructions, and they were rarely able to actually work with the machine. Like the middle grade autobiography, “Reaching for the Moon,” about Katherine Johnson, a black mathematician who worked on the moon landing, these women were able to prove that women could perform every bit as well as men when coding, calculating, and thinking outside the box. There is fascinating backstory information about each woman, and the story is inspirational. (Disney-Hyperion)

“Can You Crack the Code? A Fascinating History of Ciphers and Cryptography” by Ella

Schwartz and illustrated by Lily Williams is a detailed book about codes throughout history. It’s about how codes and ciphers have been used to keep secrets, and it explains that one of the earliest known ciphers was invented by Julius Caesar, the Roman emperor, over two thousand years ago. More recently, coding and deciphering were essential during World War II, when the work of Alan Turing and his colleagues to unlock the German code named Enigma was crucial to the war effort and the ultimate defeat of the Nazi regime. This appealing nonfiction book explains why it’s now probably impossible to hack a bank president’s password and steal millions from a bank. It also explains what second-factor authentication is and how biometrics can be used to protect accounts. Throughout the book, there are engaging activities in coding and ciphers for readers to try. Fourth and fifth grade students would love to learn about these skills and try their hand at cracking the codes. (Bloomsbury Children’s Books)

Please note: This review is based on the final copies of these books provided by the publishers for review purposes.