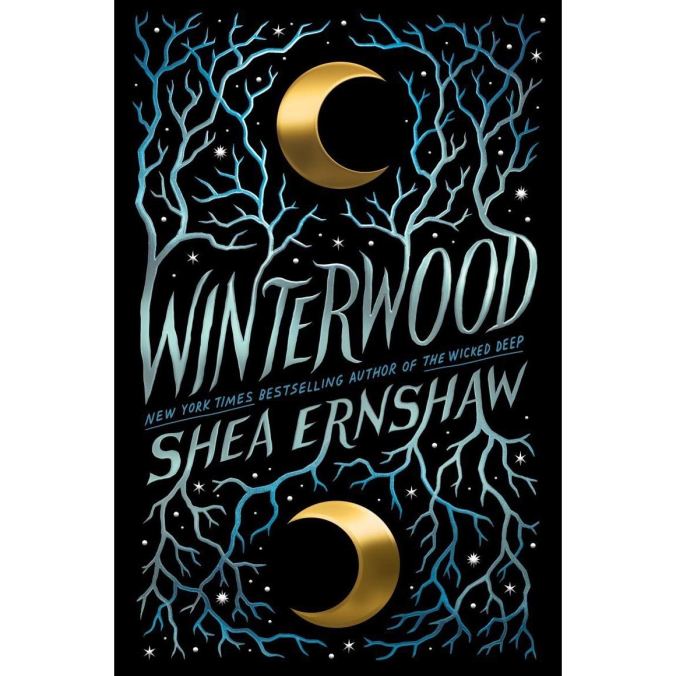 “Winterwood” by Shea Ernshaw is about witches. Specifically it’s about Nora — daughter, granddaughter, great-granddaughter, and more — descended from a long line of witches who live and practice their magic along the shore of Jackjaw Lake and in the shadow of the forest outside the town of Fir Haven.

The Walker women came out of the forest back in the days when Fir Haven was a small gold mining town, and ever since, they have lived in a log cabin between the summer cabins and the dark forest. Nora lives there with her mother, now that her grandmother has died, leaving Nora with her moonstone ring. But Nora’s mother has left to sell her honey (charming bees is her particular magic), and Nora is alone in the cabin with only her wolf, Fin, to protect her when a blizzard envelopes the town and cuts off electricity and the roads.

Nora and Fin enter the Wicker Woods in search of lost items. She knows, from her grandmother’s warnings, that you can only enter the magic woods on a full moon, or you won’t get out alive. What Nora finds in the woods is a boy who has gone missing for the two weeks since the town was cut off by the storm. He is lying in the snow, but at Nora’s touch he wakes up and follows her out of the woods. Oliver can’t remember what happened the night he disappeared and another boy, Max, died.

Both of them lived at the Jackjaw Camp for Wayward Boys where unruly boys were sent to learn behavior. While most of the boys are truly miscreants, some are like Oliver, sent there because they had no family who cared about them. It’s easy to send unwanted children away and forget about them. His parents had died, and his uncle really didn’t want the responsibility of a child to care for. And soon after his arrival, Oliver disappeared, only to reappear in the woods when he’s found by Nora.

The story unfolds slowly, narrated by both Nora and Oliver. There are also inserts with black pages and white type that briefly share the stories of Nora’s witchy ancestors, including her grandmother. Each Walker descendant had a different type of magic. Nora believes that she doesn’t have any magic, and while she uses the Walker book of magic spells to concoct something to help Oliver, there’s nothing in there for her. Or so she believes.

The clues are there, but it’s not until almost the end of the story that we find out just what kind of magic Nora does possess. Nothing in her life could have prepared her for the fact that her magic, once it reveals itself, is perhaps the most powerful magic her family has ever seen.

While the book begins slowly, the characters are fascinating. Nora becomes a real teenager, with mother troubles and feeling like a loner at school because she is ostracized for being a witch and being “different.” And while Nora sometimes wants to be normal and have sleepovers with a best friend (which she doesn’t have), she also sleeps with the window open during a snow storm to breathe in the smell of the forest. She knows things about the forest and the lake that no one else in town knows. She knows about magic and spells and things that move and groan in the dark and are mortally dangerous. Nora isn’t like other girls.

This is an enjoyable fantasy that’s a pretty quick read. It’s thoughtful and charming. Ernshaw writes about characters that are like real people — some are heroes and some are definitely not — and the heroes have their flaws, making them quite relatable. “Winterwood” is a fine choice for classroom bookshelves and school libraries.

Please note: This review is based on the galley provided by the publisher, Simon Pulse, for review purposes.