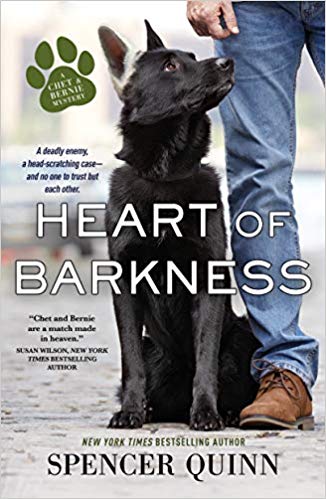 “Heart of Barkness” by Spencer Quinn brings back mystery-lovers’ favorite four-legged detective, Chet, with his sidekick, the two-legged Bernie Little. It’s Bernie Little’s detective agency, but both Chet and Bernie are very aware that it takes two to solve most mysteries. That’s why whenever Bernie introduces himself to someone, he introduces both of them. Chet and Bernie are a team and they are inseparable.

In this mystery, Chet and Bernie meet Lotty Pilgrim, a country singer who seems to have hit rock-bottom. She is playing in dives and lives on a small, run-down ranch. Her manager/boyfriend is much younger than she, and from the start, Bernie is no fan of his.

Bernie has just gotten out of the hospital after a near-death experience (read about it in the last Chet and Bernie book, “Scents and Sensibility”), and Chet is thrilled to be reunited with his other half. In fact, the mystery begins when Chet and Bernie go to hear Lotty sing. Bernie puts a $100 bill in her tip jar, but the money gets stolen by someone at the bar. Chet and Bernie go after the thief, and what happens after that is just one part of what becomes the mystery and history of Lottie’s life and her problems.

Chet’s narration is spot-on doggy, with appropriate distractions (Slim Jims and steak smells) and some canine self-deprecating awareness. After all, when a dog is telling the story, there is definitely some translation needed, but Chet is one sharp dog, and he catches some things mere humans might overlook. Chet explains it beautifully when the thief grabs the money from the tip jar,

“Something sneaky was going down. I knew that in a flash. You might be thinking, Wow Chet, how fast your mind works. But you’d be wrong. My mind had nothing to do with it. My teeth were the smart ones. Sneakiness gives them this powerful urge, the urge to…to do something, let’s leave it at that.”

So they chase the thief, recover the money but not the guy, and consider it done. It’s not. The ties that connect the different characters, the obvious good guys and the obvious and not-so-obvious bad guys are sometimes hard to see. But Chet and Bernie have a special power – the power of the dog and human combination – and they go where others might fail.

Quinn’s narrative, via Chet, is touching but always humorous, too. While reader’s will feel Lottie’s plight and worry about Bernie’s romantic situation, they will chuckle while reading Chet’s wonderfully canine narrative.

Mystery lovers devour the Chet and Bernie series. Dog lovers do, too. No fleas involved.

This review was originally posted on Bookreporter.com.

Please note: This review is based on the advance reader’s copy provided by the publisher, Forge, for review purposes.