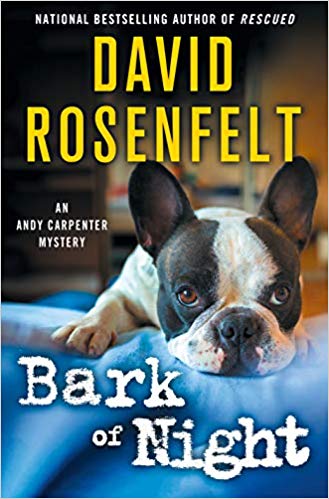 No one does murder and humor like David Rosenfelt, and with “Bark of Night,” the nineteenth book in the series featuring reluctant attorney and dog-lover Andy Carpenter, Rosenfelt continues with his trademark sarcasm, self-deprecating narrative, and courtroom drama.

After taking his beloved golden retriever, Tara, to the vet for a checkup, Andy is disturbed that the vet wants to talk to him in his office. Sure that he’s going to hear bad news about Tara, Andy is relieved when the vet asks him about a dog who had been brought in to be killed. Even on the first page of the book, the humor is front and center.

“I make a decision as I follow him back there. If he says anything negative about Tara’s health, I am going to strangle him right there in the office I didn’t know he had, and then feed pieces of his body to the fish in the aquarium he has in the waiting area.”

Andy is an attorney who has become extremely wealthy due to an inheritance, so he doesn’t have to work. And he’d rather not work. At all. But every time he thinks he’s safe, another case comes along – often involving a dog in need – and he feels compelled to take the case. It helps that Laurie, his wife, is a former police officer and detective. She makes sure he’s safe, and when she can’t ensure his safety, she has Marcus, the scariest guy around, protecting Andy. When she tells Andy that she is going to have Marcus watch out for him, Andy thinks,

“I could argue the point, but she won’t give in and I’ll just look weak when I cave. Trying not to look weak is particularly important to weak people like myself; it’s one of our weaknesses.”

The French bulldog that had been left at the vet’s for euthanasia is Truman. After a frightening man left him there, signed the form authorizing the killing, and paid the fee in cash, the vet examined the dog. There was a microchip in the dog, and the owner listed was not the name on the euthanasia form, hence the vet’s asking for Andy’s involvement. Andy takes the dog to his rescue and then finds out that the real owner of the dog had just been killed. Somehow, Andy ends up representing Joey Gamble, the kid who has been falsely accused of the murder.

As in all the Andy Carpenter mysteries, one thing leads cleverly to another, and the reader learns about the bad guys from the third person narrative interspersed with the first person narrative from Andy himself. It’s with Andy’s narrative that Rosenfelt has consistently demonstrated his writing genius. He has created a character whose self-deprecation oozes from every page, and readers can’t help but smile and chuckle at the extraordinarily humorous narrative.

In this case, the murdered man was a film maker, and by retracing his steps, Andy and his team think they’ve discovered something big. Little by little, clue by clue, bad guy dying by bad guy dying, the case builds. But as with almost all of Andy’s cases, he must go to trial before he has all the pieces in place. He has no idea of how he is going to prove his client is innocent.

Loyal fans love the last minute saves, the dogs along the way, and the nutty characters who work with Andy. There is Edna, the receptionist who only continues working because she rarely has any work to do. She threatens to quit at the start of the story when she finds out they have a new client. Andy responds and says to Edna, “I understand what you’re saying. If you have to work, you’re going to stop working, and if you don’t have to work, you’ll continue working.” The others on Andy’s team are just as quirky.

Even if this is the first Andy Carpenter novel you’ve picked up, you’re sure to enjoy it. But to get the most enjoyment from the series, start at the beginning and read them all. You won’t regret it!

Please note: This review is based on the advanced reader copy provided by the publisher, Minotaur Books, for review purposes.