Books about historical figures are wonderful to read to young and older children at any time, but March is Women’s History Month, so it’s a perfect time to learn about new picture books featuring important famous — and not-so-famous — women from around the world. Each of the six books listed here is powerful in its own right. Each one deserves a special place on a classroom. library, or home bookshelf.

“The A-Z of Wonder Women” by Yvonne Lin is literally an alphabet of women, current and past, some household names and others unknown to most, who have 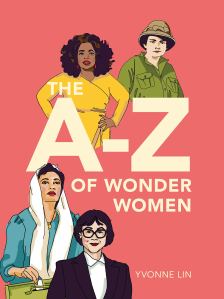 helped create the world we live in. “A” is for Ada Lovelace, who lived in the nineteenth century. She was an English mathematician who “wrote the first punch-card algorithm a century before the modern computer age.” She was the first computer programmer. The alphabet figures continue through Bhutto, the first democratically elected female leader of a Muslim country; J.K. Rowling; Lyda Conley, the first Native American woman to bring a case to the US Supreme Court; Oprah; Ruth Bader Ginsburg; Tina Fey; author Ursula Le Guin; and to Zaha Hadid, an Iraqi-British architect known for her brilliant curved buildings. In addition to the 26 women in the body of the book, there are 22 additional “wonder women” at the end of the book, including Ching Shih, a woman who was the most successful pirate of all time! It’s a fascinating book that kids will love to peruse. (Little, Brown and Company Books for Young Readers)

“Priscilla and the Hollyhocks” by Anne Broyles is based on a true story about a girl,

Priscilla, born into slavery, who was sold as a child to a Cherokee family. One of the few things known about her was that she carried hollyhock seeds with her from home to home. In fact, the Author’s Note at the back says her hollyhocks are now knows as Priscilla’s hollyhocks and have been shared by gardeners since 1839. This picture book would be a great choice for starting a conversation or unit on the “Trail of Tears” or the history of Native Americans in our country. Most people don’t know that the Cherokees did their utmost to assimilate into the Anglo way of life. They farmed, had schools, and even had a newspaper. They also had slaves. In this story, Priscilla was born in Georgia, and her mother was sold when Priscilla was still very young. She happened to meet a visitor, Basil Silkwood, who told her about schools and expressed his sadness about her condition as a slave. Shortly thereafter, she was sold to a Cherokee family and lived with them until their way of life was uprooted because of President Jackson’s order to force the relocation of the Cherokee from their ancestral land. However, during the march, in Jonesboro, Illinois, by pure chance, Priscilla saw Basil Silkwood at a hotel and approached him. He bought Priscilla from her Cherokee owners and he and his wife set her free. She lived with his family, became part of his family, and planted her hollyhocks. And while she never forgot her mother, she was happy and free. (Charlesbridge)

“Wilma’s Way Home: The Live of Wilma Mankiller” by Doreen Rappaport is a picture book for older readers that shares the life of a remarkable woman. This reviewer was not familiar with Wilma Mankiller, but she should be an inspiration to people

everywhere. She was born to a mother of Dutch Irish descent, Irene, and her mother’s family disapproved when Irene married Native American Charley Mankiller. Irene and Charley and their family did not have much money, and they survived by growing their own food, hunting and fishing. When the government wanted to relocate the Indians from their land to cities, and promised good jobs and better housing, her father was resistant. He remembered what had happened in 1838, when the government forced the Cherokee at gunpoint to leave their land. More than four thousand Cherokees died on that forced march. He was also worried that the separation from the tribe would result in the destruction of their culture and way of life. And while there is too much information in this fact-filled book to summarize, Wilma’s life is remarkable for her determination to help others. In spite of physical problems, in spite of those who didn’t want a woman to be Chief of her tribe, she persevered. Her story is truly inspirational. The illustrations by Linda Kukuk are powerful and bright. The images help to bring this wonderful story to life. (Disney-Hyperion)

“Away with Words: The Daring Story of Isabella Bird” by Lori Mortensen and illustrated

by Kristy Caldwell is the story of a woman who was the first female member of the Royal Geographic Society in England. She traveled the world at a time when women were expected to stay at home. Isabella began life as a sickly child. But when a doctor suggested that fresh air might help, her father began to take her with him on his trips. She was fascinated by the countryside, the plants, the animals, the crops. She longed to travel to other places that she learned about but was trapped by the fact that young ladies wore dresses, didn’t go to school, and didn’t travel. When another doctor suggested a sea voyage, Isabella sprang to life. She traveled to Nova Scotia and then to America, keeping meticulous notes in her red journal. She wrote about everything she saw, and then wrote a book about it on her return to England, “The Englishwoman in America.” She then made a second voyage to write a second book, but her father’s death made Isabella reconsider her traveling for a bit, but when her health began to decline, she set out again. She continued to travel the rest of her life. This book carefully shows through descriptive text and illuminating illustrations what her life was like — it’s fabulous. At the end are Author’s Note, Timeline of her life, sources for quotes, and a bibliography. (Peachtree)

There are two new releases about Supreme Court Justice Sonia Sotomayor that are both worthy of inclusion in any classroom or library. “I Am Sonia Sotomayor” by Brad Meltzer and illustrated by Christopher Eliopoulos is part of the “Ordinary People Change the World” series that includes biographies of many famous and inspirational historical figures.

The illustrations are quite appealing. As in earlier books in the series, Eliopoulos draws the protagonist with a large head on a small body, and the grown-up head and small body don’t change over the course of the book. The story is told in first person, and Meltzer creates voices that really sound like she’s telling us her story. The narrative is real and invites close attention to detail. We learn that when she was nine, Sotomayor experienced two blows. First, she was diagnosed with diabetes, and then later in the year, her father died. But her mother valued education and worked extra hours to support her family. While the neighborhood they lived in wasn’t great, Sotomayor loved to read. Fiction, nonfiction — she loved learning. She devoured Nancy Drew books and was devastated that because of her diabetes, she wouldn’t be able to be a police officer and solve crimes. She quickly found a new role model in Perry Mason. It’s a wonderful story of her life and how she continued to be inspired by those around her — her mother, teachers, even Perry Mason. In each book in this wonderful series, there’s a message for readers at the end. Sotomayor counsels kids to “… Read. Study. Do right by people. No matter where you are born, there’s no limit to what you can accomplish.” Just like her. (Dial Books for Young Readers)

“Turning Pages: My Life Story” is an autobiography by Sonia Sotomayor, and while the information in the story is very similar to Meltzer’s book, the tone and illustrations are 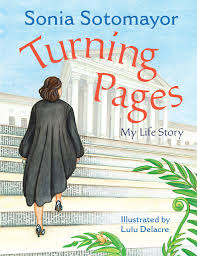 quite different. The bright colors and creative collage elements help shape the story, as do the photographs on both endpapers. The theme that she uses to tell the story is that her life is like a puzzle. She writes, “At each step in my life, I would put together the answer like pieces to a puzzle.” It’s also about her her love for her family and her love for books. After her mother bought a set of encyclopedias, she was immersed in learning. “Every time I opened a volume, I learned new words and ideas. There were miracles of life taking place in our bodies and outside in the world around us, and I started to think more about my place in it.” All along the way in her life, books taught her important lessons. She writes, “Books were teachers, helping me sort out right from wrong.” And she continues explaining about the importance of books in her life through the end of the book. “Like flagstones on a path, every book I ever read took me the next step I needed to go in school and in life, even if I didn’t know exactly where the trail would lead.” This book is inspiring and beautifully created from the cover, with its illustration of Sotomayor walking up the steps to the Supreme Court Building on steps with book text for risers, to the back cover showing a library and young Sotomayor in a paper folded boat looking ahead to the river that will be her incredible life. (Philomel Books)