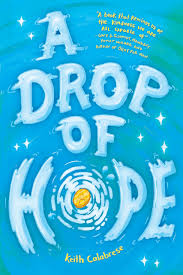 “A Drop of Hope” by Keith Calabrese is a touching and brilliant novel for middle grade readers. It’s the story of a small town and the kids who live in the small town. The main characters are in sixth grade, and they are brought together by serendipity.

Actually, they all attend the same middle school, appropriately — in light of what happens — named Rod Serling Middle School. But what really brings three of the students together is the old wishing well, the Thompkins Well. The reader meets the important sixth graders at the beginning, when one of them, Tommy Bricks, makes fun of Winston Patil’s drawings. Ernest, a small boy whose father owns the factory that employs much of the town, stands up to Tommy. Then, Ryan, whose father works for Ernest’s father, feels that he has to defend Ernest. So Tommy threatens Ryan, who sneaks Ernest away after school.

Those acts are the spark that ignites the events until they culminate, at the end of the book, in a lightning storm. When going through the woods to avoid Tommy, Ernest and Ryan come upon the Thompkins Well. It’s old, and they actually end up underneath the well and accidentally overhear some kids making wishes. First, they hear Winston, who recently moved to town, wishing for a friend.

Also at the beginning of the story, Ernest promises his dying grandfather that he will clean out the grandfather’s attic. His grandfather tells him that there are some things he should have parted with a long time ago. Ernest finds the items, and they quite mysteriously become the catalyst for people’s wishes being granted.

The story is like a huge spider web, and the different parts of each chapter, which all have headings, are as if the author is writing about the different parts that the web is attached to, subtly demonstrating for the reader how the thread draws those various elements closer and closer together, until at the center, all the parts are connected.

The stories and the many characters seem unrelated at first, but the reader eventually realizes that all will make sense by the end of the story. And the writing throughout the book is beautiful. For example, when Ryan starts to wonder if the wishes are really being granted, Calabrese writes,

“And that scared him. Not because Ryan was against people catching a break for a change. But he was of the life philosophy that the light at the end of the tunnel was usually an oncoming train. For Ryan the other shoe never dropped. The universe usually threw it at you.”

A recent study highlighted by NPR shows that our emotions are not limited in scope, and that emotions can be contagious, almost like a cold or flu. “Christakis’ research has shown that if you start to become happier with your life, a friend living close by has a 25 percent higher chance of becoming happy, too. And your partner is more likely to feel better as well. The happiness can even spread to people to whom you’re indirectly connected.”

In the story, Calabrese brilliantly mirrors that view. “Lizzy couldn’t get over how persistently hopeful that kid was. She also couldn’t get over how infectious his hopefulness could be.” She is reflecting on Ernest, the nice kid who is smaller than other boys his age and is coddled by his parents, but who is really the driving force behind the sewing together of those apparently disparate plot threads.

Calabrese also uses foreshadowing to great effect. In one chapter, Ryan is watching a movie, a thriller. The author writes, “Ryan had learned from his dad about a common device in these kinds of movies was a plot twist called the false calm, a trick ending whereby the killer is either caught or killed so that the hero will let his guard down, only to then discover that the police arrested the wrong guy or the killer fakes his death and that everyone is now in even worse danger than before.”

There are really five main characters in the story. Lizzy, Ryan and Ernest are the three who know about the well and the wishes, but Winston and Tommy also feature significantly. And Tommy’s story is heartbreaking. His father is physically and emotionally abusive, and his mother does nothing to protect Tommy. She is unapologetic about it, even after catching Tommy’s father beating him with a belt. Both of Tommy’s brothers endured the abuse, and one ended up in jail, the other in the military. Tommy is alone until he befriends Winston, whose dark skin would surely enflame Tommy’s father’s small-town, racist sensibilities.

Most of all, the story teaches that we are all connected in ways we may not be aware of. Like Six Degrees of Separation (which is actually closer to 6.6, according to Microsoft researchers), everyone in the town is connected. And the happiness of one means that the kids really wonder if the wishes are being granted, and if so, are the gifts from Ernest’s grandfather’s attic the reason?

This story would be a powerful read aloud for fifth through middle school grades. There is some graphic description of Tommy’s beating, but it’s important for children of certain ages to know that such abuse exists and needs to be reported. The story is about friendship, loyalty, responsibility, hope, and the power of caring for another human being. This book clearly demonstrates the power of relationships and the power that kids can hold if they just do the right thing.

Please note: This review is based on the final, hardcover book provided by Scholastic Books, the publisher, for review purposes.