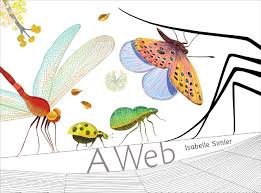 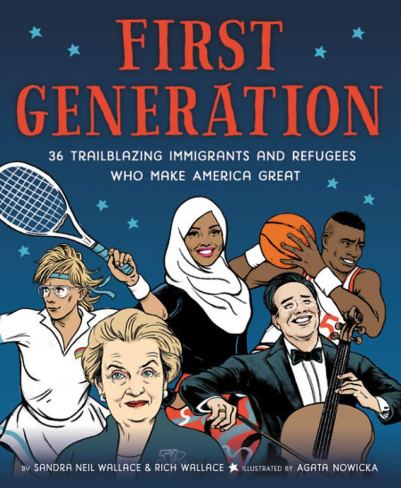 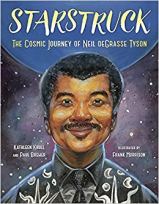 Nonfiction picture books are perfect devices to provide information to young readers who would not be able to access chapter books, but who hunger for real facts. Included in this group are picture books about historical figures, modern figures, science and nature.

“Starstruck: The Cosmic Journey of Neil DeGrasse Tyson” is written by Kathleen Krull and Paul Brewer. It’s the fascinating story of the man who is probably one of the best known scientists in modern day — a guy who is kind of a rock star to kids. While Bill Nye started the science craze, DeGrasse has taken it to another level. DeGrasse’s mother was of Puerto Rican descent and his father was African American, giving readers a diverse figure to learn about and admire. (Crown Books for Young Readers)

“Eliza: The Story of Elizabeth Schuyler Hamilton” by Margaret McNamara is a picture book for history buffs. Written in the guise of a letter from Eliza Hamilton to her soon-to-be-born great-grandchild, it’s filled with her life history and is filled with examples of her brilliance. She was a remarkable woman and ahead of her time in many ways from starting the state’s first private orphanage to saving her husband’s documents as his legacy. (Schwartz & Wade Books) 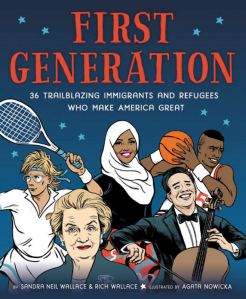 by Sandra Neil Wallace and Rich Wallace is another picture book for older readers filled with the stories of artists, athletes, activists, musicians, scientists, entrepreneurs, and more — all of whom were not born in America, but who made America their home. One inclusion is world-famous Yo-Yo Ma, the cellist who was born in Paris to Chinese parents and became perhaps the most famous cello player ever. Most people may not know that after he graduated from the prestigious Julliard School of Music, he then attended Harvard to study anthropology and German literature to round out his education. Hamdi Ulukaya, the founder of Chobani, the yogurt company, grew up in the mountains of Turkey. He spent part of the year away from his family home following the flocks of sheep and goats through the mountains. When he moved to America, he decided to make feta cheese and the same rich yogurt he had made with his family as a child. He is not only one of the world’s wealthiest people, he is an activist for refugees all over the world. This book is a treasure to show children the value of diverse cultures, and that those who come to America, help make America a wonderful, colorful, and brilliant country. (Little, Brown and Company Books for Young Readers)

“Reach Higher: An Inspiring Photo Celebration of First Lady Michelle Obama” by Amanda Lucidon, is a beautiful collection of photographs taken by Lucidon, the former official White House photographer. This is the children’s version of the book “Chasing Light: Michelle Obama Through the Lens of a White House Photographer.” In this beautifully collated book, there are seventy photographs that celebrate First Lady Obama’s sense of humor, kindness, and love for people around her. The photos are lovely and each one includes the date and background information about the photo. This book is one that will be a treasured keepsake for fans of Michelle Obama. (Crown Books for Young Readers)

“Once Upon a Star: A Poetic Journey Through Space” by James Carter is a picture book for younger readers explaining the beginning of the universe and the beginning of our planet, Earth. It’s told in rhyme, and because of the simple text along with the bright, bold illustrations by Mar Hernandez, the information is surprisingly accessible to young readers. Although it’s nonfiction, the engaging format will mean that kids will enjoy listening to the story and will want to read it over and over. (Doubleday Books for Young Readers)

“A Web” by Isabelle Simler is filled with beautiful illustrations of nature — everything that a spider might find in her path from flowers to nuts to butterflies to thorns. Exquisitely drawn are flying insects, pebbles, leaves and seeds. Cleverly included are insects that resemble something else like the woolly caterpillar that mimics the poplar catkin and the leaf insect which really, really looks like a leaf. And lastly the black spider, parts of which have been glimpsed in the preceding pages, and whose web is fully depicted toward the end. Nature loving children will pore over this treasure trove of small jewels from nature. (Peter Pauper Press, Inc.)

And last, but certainly not least, is a book that’s not quite a picture book, but rather a

book filled with activities and projects that will keep any kid happily involved for hours and hours. “Destroy This Book in the Name of Science!” by Mike Barfield is just that, a book that must be taken apart so that the many fascinating activities and projects can be explored by intrepid young readers. The activities are easy to assemble and all that is needed besides the book are scissors, glue, tape, a pencil and maybe the occasional piece of string. The first activity is learning about the Hermann Grid Illusion which is all about optical illusions. There are many more fun and informative activities with explanations that will — just maybe — get kids interested in science. (Crown Books for Young Readers)

Please note: These reviews are based on the final, mostly hardcover books provided by the publishers for review purposes.