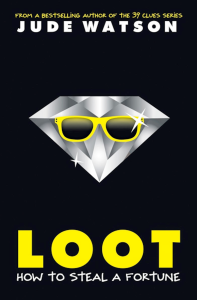 Kids will love “Loot: How to Steal a Fortune,” guaranteed. This middle grade book by Jude Watson starts with a bang, and kids will be hooked from the first page. The adventure continues nonstop until the final page, and even that page leaves the mystery going for a possible sequel.

The story begins with a heist; the heist of three famous pieces of jewelry. One of them, however, contained seven unlucky magical moonstones. Legend was that the moonstones were cursed. And the three thieves in the robbery were, in fact, all cursed. One was caught that night, one died, and the other had his children cursed. That third robber was March’s father. March, the protagonist, saw his father die by falling from the roof during a job. Before he fell, his father threw March a moonstone. March was later to find out that it was one of the seven mystical moonstones.

March follows his father’s clues and meets his twin sister, who he never knew existed. They are caught and sent to the U.S. and put in foster care. Their foster home is as horrible as stereotypical foster homes, but they meet two other fosters and all manage to escape. The next step is to follow March’s dad’s clues and get the seven moonstones back.

The woman from whom March’s dad, Alfie, stole the moonstones is willing to pay seven million dollars for their return. March’s dad left information about how to execute each heist to get them. All that March, Jules (his sister), Darius and Izzy (their foster friends) have to do is execute the plans. But trying to stop them is a former cop who wants the deal for himself. And everything becomes even more difficult when Alfie’s former partner tries to get the moonstones, too. Can four clever kids outsmart a thief and a former cop? Readers will be dying to know the answer.

This would be a wonderful class read aloud because of the discussion that could ensue. Themes of abandonment, family, friendship, trust and morality are all great outcomes for group exploration. What makes a family? How far will people go to keep family members safe? When, if ever, is it okay to commit a crime?

Please note: This review is based on the paperback book provided by Scholastic Press for review purposes.