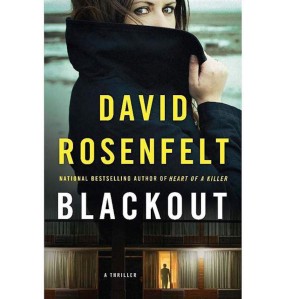 The dependably entertaining and prolific David Rosenfelt strikes again with his latest stand-alone thriller, “Blackout.” Filled with his trademark cast of fascinating characters, his always-funny and wittily self-deprecating hero, his usual strong and gorgeous female supporting love interest, and plot twists and turns aplenty, “Blackout” once again provides us with “finish-it-in-one-night” suspense and adventure.

The hero is Doug Blake, a New Jersey State Police officer who is a rebellious, unpredictable, rule-bending, and lovable character. But the first plot twist involving Blake appears not toward the end of the book, but at the very beginning. While hot on the trail of Nicholas Bennett, a loathsome crime lord, Blake is shot, falls on his head, and lapses into a coma. When he emerges from the near-deathly sleep, he is victimized by a rare form of amnesia — he remembers nothing of the last ten years of his life.

It is upon his awakening that we get to really know him (though he wouldn’t know us if we had happened to meet him during the previous ten years) as Rosenfelt’s ubiquitous and amazing talent for first person narrative humor kicks in at full throttle. As always, this author’s uncanny ability to present terrific comedy right along with heart-throbbing suspense hits us directly in the gut. He is unique.

The plot proceeds apace as the questions and suspense crescendo: Who shot Blake? Why did he get shot? Will he get his memory back? Will he be the same man he was before the shooting? What villainous plans are afoot? Who are the bad guys and who are the good guys — and who’s fooling Blake and fooling us?

There’s also a delicious cornucopia of villains here — Bennett the crime lord; Luther, his ruthless hit man; Gharsi, an international terrorist, and the surprise guest-artist/brains behind the whole dastardly plot. A sumptuous villainous feast, indeed. As usual with Rosenfelt, it will keep you on the edge of your seat with suspense while you work hard to keep from falling off your chair with laughter. A winning combination. (JK)

Please note: This review is based on the final hardcover book provided by Minotaur Press for review purposes.