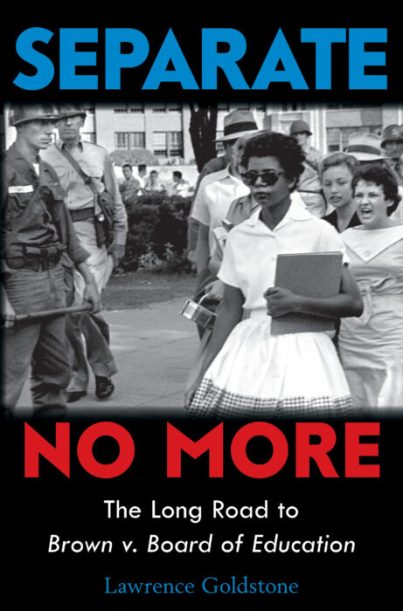 “Separate No More: The Long Road to Brown v. Board of Education” by Lawrence Goldstone is an important nonfiction young adult history of segregation and bigotry beginning in 1892 in the famous Supreme Court case Plessy v. Ferguson. Goldstone writes the story of segregation and institutionalized racism and bigotry as if writing a novel, and many of the historical figures and events he shares become real and present.

Make no mistake: while this book studies the changes in civil rights and the right to equality in education, this is no dry tome. Instead, this is a book that will inspire, enrage, and enlighten its readers about the history of post-Civil War laws and Jim Crow. I had taught my fifth grade students about Black history through literature including poems and short stories by Countee Cullen and Langston Hughes, including the very powerful “Ballad of Birmingham” by Dudley Randall. But one poem whose meaning eluded me at the time was “Booker T. and W.E.B.” by Dudley Randall. In “Separate No More,” Goldstone explains the tensions and different paths Booker T. Washington and W.E.B Du Bois took in their quest for equal rights, so now, finally, I understand Randall’s meaning.

Goldstone takes us through the history of lawsuits regarding equity and equality, but necessarily also must explain the background of the cases and the real world events that made these cases both formative and vital to the eventual landmark case of Brown v. Board of Education.  Readers will learn about the effect that the second World War had on civil rights when soldiers returning from Europe, where they were feted and treated as equals — honored even — encountered the harsh reality that in the American South, nothing had changed. Goldstone writes, “…African Americans who had served their country became special targets. So much did black soldiers enrage white supremacists that they were advised not to wear their uniforms once they got home. It did not always matter. In February, 1946, Isaac Woodard, a black veteran of World War II, was attacked and blinded by policemen in Aiken, South Carolina. No one was punished or arrested.”  We also learn that in July of that year, two Black veterans and their wives were dragged from their car in Georgia, and murdered by a white mob.

There is a chapter that includes an explanation of the desegregation of sports when Jackie Robinson integrated the Brooklyn Dodgers in 1947. One brave figure who fought inequality whom Goldstone writes about with a bit of humor is Irene Morgan. She worked for a defense plant, and while taking a bus from Virginia to Baltimore, she was told to give up her seat in the “colored” section of the Greyhound bus so a white person could sit. She refused. The driver called the local sheriff, furious, and Irene was handed an arrest warrant. “She tore it up and tossed it out the bus window.” Then when the deputy tried to drag her off the bus, she fought back. The LDF, an offshoot of the NAACP, whose origins are explained in earlier chapters, took her case. Goldstone explains the legal reasoning in how the NAACP brought the case up. Instead of citing the 14th Amendment, equal protection under the law, they argued it under Article I, Section 8 of the Constitution regarding interstate travel. They won. It wasn’t a complete victory for equal rights, but it was one small step.

And the book is filled with such stories and explanations of the small steps that eventually led to the many cases that were consolidated before the Supreme Court as Brown v. Board of Education. Goldstone doesn’t end the book with the conclusion of that case, however. He goes on to clarify both the good and the bad that came out of that decision. White mobs prevented Black parents from registering their children for school, Black students who were attending integrated schools were shoved down stairs, and many received death threats. Goldstone writes, “When John F. Kennedy was murdered in 1963, white students in Baton Rouge formed a circle around a handful of blacks at their school and chanted, ‘We killed Lincoln, we killed Kennedy, and we’ll kill anyone else who tries to help niggers.'” It wasn’t all “happily ever after.”

There is an extensive Bibliography as well as Source Notes and credits for photographs and illustrations. This is an extremely well-written, compelling history that should be utilized by middle school and high school teachers. I do think that because of the violence and the references to legal cases and law, it’s appropriate for older readers, in 6th grade through high school, but it’s also a wonderful resource for people like me who would like a relatively quick read that is filled with important history regarding this aspect of civil rights. Educators attempting to teach the history of civil rights in America would do well to use this book as one of their resources.

Please note: This review is based on the advance reader’s copy provided by Scholastic Focus, the publisher, for review purposes.