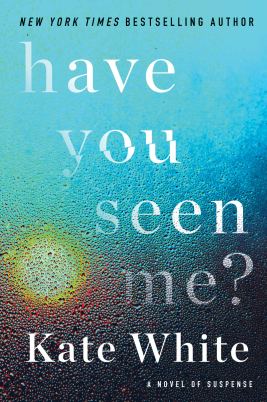 “Have You Seen Me?” is the latest mystery by Kate White, who is also the author of the Bailey Weggins mysteries, including “Such a Perfect Wife” and “Even if It Kills Her.” This new novel is a stand alone novel, and White generously provides us with many, many choices when we try to figure out who the bad guy (or bad guys or gals) might be.

We learn at the start that financial journalist Ally Linden has lost her memory of the past few days. She turns up at an office she hasn’t worked at for five years. She’s shocked when she’s told, by the CEO who also was a former boyfriend, that she hasn’t worked there for years. She collapses and is taken to the hospital by ambulance. Her purse and phone are nowhere to be found.

This is just the beginning of Ally’s journey as she tries to regain her memory and find out what happened, not only to her memory and why she had a dissociative state, but where she spent those lost days and what happened to her during that time. One clue is a bunch of bloody tissue wadded up in the pocket of her raincoat.

It doesn’t help that everyone around her is acting just a bit off. Her attorney husband is on a big case and working late most nights, but even when he’s home, he’s a bit distant. He explains that they had an argument the night before she experienced her memory loss. Was that enough to cause a fugue state?

Her best friend has been overseas for business, but even when she returns, she’s not very available. Is she really ill, or is there another reason for her absence? Ally’s older brother Roger seems to be there for her, but his wife is another story. And her new intern is looking very off as she insists on visiting Ally in her apartment and just seems to have a slightly suspicious air to what she does and what she says.

We learn that Ally thinks maybe some of this has to do with the dead child she found in the woods when she was nine years old. We learn that Ally lied about the situation when she was a child, and that experience becomes part of the mystery as the police are reinvestigating it as a cold case. Ally begins to rely on her therapist to help her though this time, and her therapist is very solicitous, offering extra sessions and advising Ally to not try too hard to get her memory back, to just let it happen gradually.

The twists in this tale are many, and they reveal unexpected truths about Ally and those around her. White gives us so many possibilities to choose from as to who is stalking Ally, and even whether she might be imagining some of the episodes, that when the truth is finally revealed, there will certainly be few who will have guessed the outcome.

This is a perfect novel to pick up for some escapism and some reading that will certainly take. you away — to New York and into Ally’s mind as she searches for the truth.

Please note: This review is based on the advance reader’s edition provided by Harper, the publisher, for review purposes.