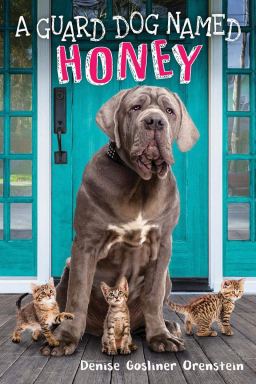 I started the middle grade story “A Guard Dog Named Honey” by Denise Gosliner Orenstein predisposed to dislike it. I don’t usually approach books with that attitude, of course, but this one is about a girl who wants to sell a dog for profit in order to raise the bail money to get her brother out of jail. I’m all about the dogs, and if her brother was in jail, I reasoned, no dog should suffer because of his stupidity.

Well, it turns out (minor spoiler) that Orenstein agrees with me. Once you meet Honey, the huge, slobbery Italian Neapolitan mastiff that cost thousands of dollars and was supposed to protect Phoebe, who lived in a huge house on the bluff, you know that no author in his or her right mind would allow anything bad to happen to that sweet, gentle dog.

This is the classic island tale of the townsfolk who live on the island year-round and work for the rich summer folk who grace the island with their presence only in the fair summer months. Bean is the feisty main character. She and her brother grew up on the island, and in fact, they call the mainland “America” as if it were a different country. Their father split when he couldn’t take living on the island anymore, and his loss has a depressing effect on each of the remaining members of the family. Bean’s mom works at the local grocery store, making minimum wage and barely paying the bills for the three of them. They live in a tiny two-bedroom house, and Bean and her 17-year-old brother had shared a room until he was arrested for joyriding. He is now in jail, and because they can’t pay his bail, he’ll be in jail until his trial in a few months.

Bean is determined to pay Willis’ bail and get him out of jail. Her brother is smart — his goal has been to get a scholarship to Harvard because he’s that smart. But we readers know that if he were really that smart, why on earth did he do something to end up in jail? Huh?

So in her search for a way to earn the money she needs, Bean meets Phoebe. Phoebe lives in a huge house with her nanny, a quirky man named Edwin. She also lives with her huge “guard” dog, Honey. While Bean befriends Phoebe in a calculating manner to try to get her parents to hire Bean to paint their house — because it’s not easy being eleven years old and trying to get hired — the two girls become friends. Part of that may be Bean’s plan to sell Honey to earn the money for her brother’s bail, but in the end — well, at least for that summer — they are friends.

But what happens when a big slobbery dog who doesn’t do much still manages to charm you and steal your heart? What happens when your plan goes so badly awry that you are worried about the safety of not only Honey, but other dogs? Do you choose family — or do you do what many might say is the “right” thing, which might not help your brother?

These weighty questions and more will make readers ponder choices and right and wrong. Is it all right to do a wrong in order to make something right?

The story will steal its way into your heart and remain there, snuggled in like a Neapolitan mastiff never could.

Please note: This review is based on the advance reader’s copy provided by Scholastic, the publisher, for review purposes.