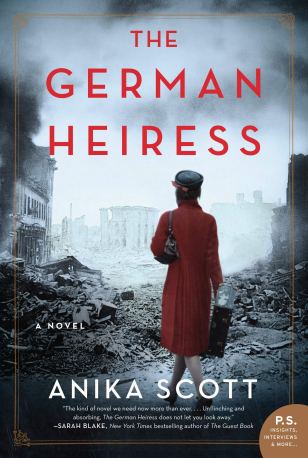 In “The German Heiress,” author Anika Scott introduces us to Clara Falkenberg, the heiress to a German iron fortune. She could have spent the war socializing with the Nazis, but instead runs the family factories. And there’s a cost.

Clara is a complex main character who took actions during WWII that seemed best at the time, but over the course of this touching novel she will be forced to wonder if she should have acted differently. Before the war, Clara Falkenberg was just the daughter of one of the wealthiest men in Germany. Her father owned an ironworks empire, and her mother, a member of the English ruling class, never let Clara forget her place. Clara was expected to marry well and be a good daughter.

Yet Clara wanted to work, and she started working for her father as a teenager and worked her way up. During the war, she was actually tasked with running the whole company when her father couldn’t and her brothers had been killed. Clara rose to the task magnificently. German magazines touted Clara as the perfect German woman, the “Iron Fräulein.”

Now the war is over, and Clara is hiding her identity because she doesn’t want to join her father in the clutches of the Allies in a British prison, awaiting trial for collaboration with the Nazis. Clara is masquerading as Fräulein Miller in Hamlin, a town near her hometown of Essen. But she needs to track down her best friend Elisa and find out what happened to her and to Elisa’s son. So she returns to Essen, narrowly escaping from a particular British officer looking for her, and sets out to find Elisa.

At the same time, we meet Jakob, a former German soldier who lost a leg before the war ended. He and Clara learn that they both are on the same mission. And while Jakob doesn’t disclose why he is searching for Elisa, he sets out to see what he can learn. The story takes us through the developing relationship between Clara and Jakob, and how Elisa and Clara’s backgrounds, and the secrets that they’ve kept hidden, have changed their lives.

Scott seems to faithfully recreate post-war Germany, and as the characters stumble through the ruins of Essen in the bitter winter cold, we can see in our minds the rubble and the snow and the emptiness of what was left once the bombers dropped their deadly loads and flew away. We root for the characters to finally find a modicum of happiness, which seems almost impossible in the dark days where cold and hunger takes lives daily.

But in spite of the darkness of this post-war life, there is beauty in relationships. And learning about Clara — what she did during the war that she is proud of as well as what she did that she is not proud of — is like watching a flower bloom. Yet the reader will have to decide whether Clara did enough. Is she deserving of forgiveness?

There are questions that Clara, and we the readers, must consider. If you try to do good, to help people, but in the end what you do does not help at all, did you do anything? It’s kind of like the tree falling in the forest analogy. If you try to help but they die anyway, is it as if you had done nothing? You did not, after all, manage to make a difference in the end.

The story is compelling and written with an eye to detail that makes each scene real. The characters are wonderfully imperfect, each and every one. Yet that just serves to make them more likable; we can relate to their imperfections. “The German Heiress” is a book that will make you escape from your house, escape from COVID 19, and in the end, feel lucky when you do return to the present.

Please note: This review is based on the advance reader’s edition provided by William Morrow, the publisher, for review purposes.