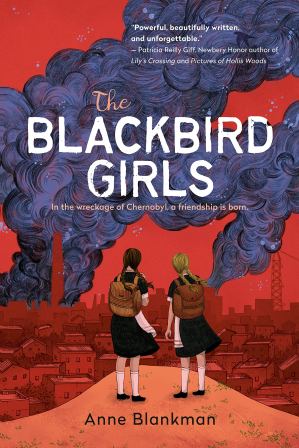 “The Blackbird Girls” by Anne Blankman is so much more than its description. It is about two young girls who are rivals, Valentina Kaplan and Oksana Savchenko who end up escaping from the town of Pripyat, their town near the nuclear power plant Chernobyl where their fathers worked. After the explosion, we learn that the government hid news of the explosion for two days, and the day after it happened, residents of that small town strolled about the streets as if it were a normal day in spite of the clouds of blue smoke and the red skies that lit up over Chernobyl.

Perhaps if the government had warned people to stay inside after the explosion there might have been fewer deaths, but in this novel we learn about the insistence of the government that nothing could go wrong, and even in the face of a deadly disaster like the explosion of a nuclear power plant, they refused to share the truth — even to save lives.

But the story really centers around the lives of the two girls, whose families were very different, and who hated each other. They are thrown together after they are evacuated when they both end up living with Valentina’s grandmother in Leningrad. We learn why Valentina never met her grandmother and why her mother had nothing to do with her own mother.

Interspersed with Valentina and Oksana’s stories is the story of Rifka, a girl living in Kiev, who is sent away by her mother just before the Germans arrive during WWII. Her struggle to survive as a young girl is heartbreaking, but nothing is as heartbreaking as what she learns when, years later, she returns to Kiev to find her family. The mother who loved her enough to send her away, and the brothers who exasperated her but whom she adored, including the newborn she helped deliver just before she left.

The three main characters each share their points of view, and at times the information and the emotions that the narration evoke are almost overwhelming. Oksana’s whole life before the Chernobyl explosion was one of child abuse and the instillation of hatred of Jews by her father. Yet she loves her father because when he’s not drunk, he’s attentive and funny. But years and years of abuse and cruelty take their toll, and that becomes all too apparent over the course of this story.

Valentina is a wonderful main character because of her spunk and her curiosity. She had the benefit of growing up with loving parents, but she endured prejudice her whole life because she is Jewish. And even though all religion is prohibited in the USSR, and Valentina’s parents don’t practice Judaism, their identity papers list them as Jews. And Jews are denied the best jobs, better living quarters, and equal treatment.

Valentina’s grandmother is a truly lovely person. She is the epitome of what every grandmother should be. And her past, which we learn about slowly over the course of the novel, in some ways makes her kindness, her affection, her unconditional love of both Valentina and Oksana remarkable. In spite of enduring terrible hardship, horrible loss, and unimaginable sorrow, she remains optimistic and forgiving.

Honestly, by the end of the book I was crying uncontrollably. The Author’s Note shares the basic information about Chernobyl and the government’s response, and because we’ve read all about it through the eyes of Valentina and Oksana, that summary is all the more real, all the more graphic, because we can picture it though the eyes of those girls.

This is a book that would be a fabulous read aloud to middle grade students. There is a plethora of topics that can be used for discussions and thoughtful questions for students to respond to. A wonderful extension would be for students to pick one aspect of the story to investigate further: the actual explosion at Chernobyl, nuclear energy and its safety, child abuse statistics, treatment of Jews in the USSR, WWII and Kiev, or any of the other themes that students glean from this multifaceted, emotional, historical fiction novel.

I cannot recommend this book enough. It’s probably one of the most emotional stories I’ve ever read, and I’ve read a lot.

Please note: This review is based on the final, hardcover book provided by Viking Books for Young Readers, the publisher, for review purposes.