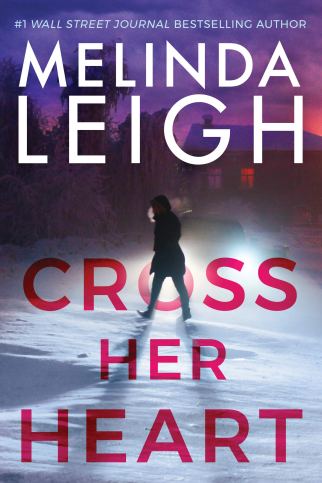 With her new mystery, “Cross Her Heart,” veteran author Melinda Leigh creates the first book in what promises to be a thrilling new series featuring homicide detective Bree Taggert, who comes with a lot of backstory, including tragedy from her childhood. She is thrust into the middle of a murder investigation when her own sister is murdered.

Bree had left her childhood town of Grey’s Hollow after the murder-suicide of her parents. Her childhood was filled with abuse and fear, especially since, as the oldest sibling to her younger sister Erin and baby brother Adam, she tried to protect them from the worst of the violence. She grew up never wanting to return to that town and with a desire to be a police officer and to protect others.

Even though Bree doesn’t see her niece and nephew as often as she’d like, when she misses a call from her sister, who sounds like she’s in trouble, returns the call and doesn’t hear back, she decides to drive back to Grey’s Hollow and see what is wrong. She finds out that her sister was brutally killed. The suspect is Justin, Erin’s husband, who has disappeared. Erin and Justin had been separated because of Justin’s inability to stay off prescription drugs, although they still care about each other.

Bree meets Matt, Justin’s best friend, at the police station. They remember each other from Justin and Erin’s wedding, and decide to work together to solve the murder. It has to be off the books because Bree isn’t in her jurisdiction and Matt is a former deputy. Matt doesn’t believe that Justin is responsible and is worried about where Justin is. As the story progresses, there are more viable suspects in addition to Justin, any of whom might have had the motivation and ability to commit the murder.

From the first page in this gripping mystery, we are hooked. The chemistry between Bree and Matt isn’t well-developed yet, but this is just the first book in the series, and there will be plenty of books ahead for that relationship to flourish. The characters are well drawn, including Kayla and Luke, Erin’s children; Craig Vance, Erin’s slimy ex-boyfriend and the until-now absent father of the two kids; Todd, the acting sheriff who may or may not be a good guy; and Dana, Bree’s partner, who has just retired and moves to Grey’s Hollow to help with the investigation and the kids.

There is also Brody, a K-9 Matt worked with when he was a police officer. When both Matt and Brody were injured during a suspicious incident, he insisted that he would only accept a settlement from the department and retire if he could also keep Brody. Now they are a team, which causes Bree some anxiety because as a child she was attacked by a dog. Brody isn’t the only dog in the series; Matt’s sister runs a dog rescue from his home — I love it!

Start with “Cross Her Heart” and keep reading as Leigh writes new additions to the series. You won’t regret it. Cheesy alert: Cross my heart.

Please note: This review is based on the advance reader’s copy provided by Montlake, the publisher, for review purposes.