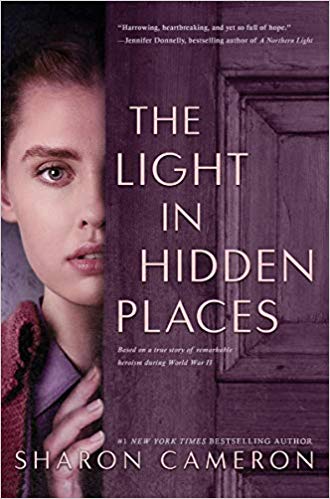 Stefania Podgórska has grown up on a large farm with her parents and many siblings. When she turns 13, she wants to escape the farm, so she travels to the larger city of Przemyśl, where she finds work with the Daimants, a Jewish family that owns a grocery store.

Stefania, nicknamed Fusia, is beloved by Mrs. Diamant, who has several sons but no daughters. Eventually, Fusia moves in with the Diamants, and she and one of the sons, Izio, fall in love. When the Diamant family is sent to the ghetto, Fusia smuggles food in to them at the risk of her life. At one point, she goes to visit her home and learns that her mother and brother have been sent to Germany as forced labor, and her six-year-old sister is living with a neighbor whose wife died. He has been beating and starving her.

So Fusia and Helena, her sister, go back to Przemyśl, where eventually Fusia finds work and hides not only Izio’s brother Max, but twelve other Jewish escapees. The story is told in first person narrative, and Cameron explains at the end of the novel that Fusia’s son had shared Fusia’s memoir with Cameron, and the plot of the novel is clearly based on Fusia’s recollections.

It’s impossible to list all the heroes in this story — real heroes who performed incredibly brave acts that very well could have cost them their lives. The story includes some terribly heart-wrenching passages about actual events that occurred during this world-shakingly evil time. It’s certainly a story that stays with the reader, while reading it and after the story is over. The evil that was perpetrated during this time of horror makes the reader face the fact that humans can be really depraved and immoral at their worst. And in this book, we see people at their worst.

Yet the wonderful part of this true tale of heroism is that we also see the very best of people — namely Fusia and her incredible young sister, Helena, who at a very young age was able to lie and cover up what the sisters were doing to protect both Fusia and herself as well as the thirteen Jews whose lives depended on them. Fusia and Helena nearly starved because they shared everything they had with the hidden people in the attic. They unquestionably risked horrible deaths by hiding the Jews. And they risked terrible repercussions even after the war by a townspeople who all too often wanted to finish the job that the Germans had not managed to complete.

I debated whether this book might be appropriate for my 5th grade readers, but because of the violence and the emotional narration — which make this book a moving and thought-provoking experience — it might be too much for such young readers. Middle school readers, high school students, and adults will — not exactly enjoy — but be moved and inspired by reading about Fusia and Helena and their incredibly courageous lives.

Be prepared to read this superb novel in one sitting or as quickly as possible so that  when Fusia and Helena escape with their lives at the end of the war, you can heave a sigh of relief. Be prepared with some tissue, because this is an emotional read. And lastly, be prepared to love their story and the manner in which Sharon Cameron turns a heroic life into a gripping novel.

Please note: This review is based on the advance reader’s copy provided by Scholastic Books, the publisher, for review purposes.