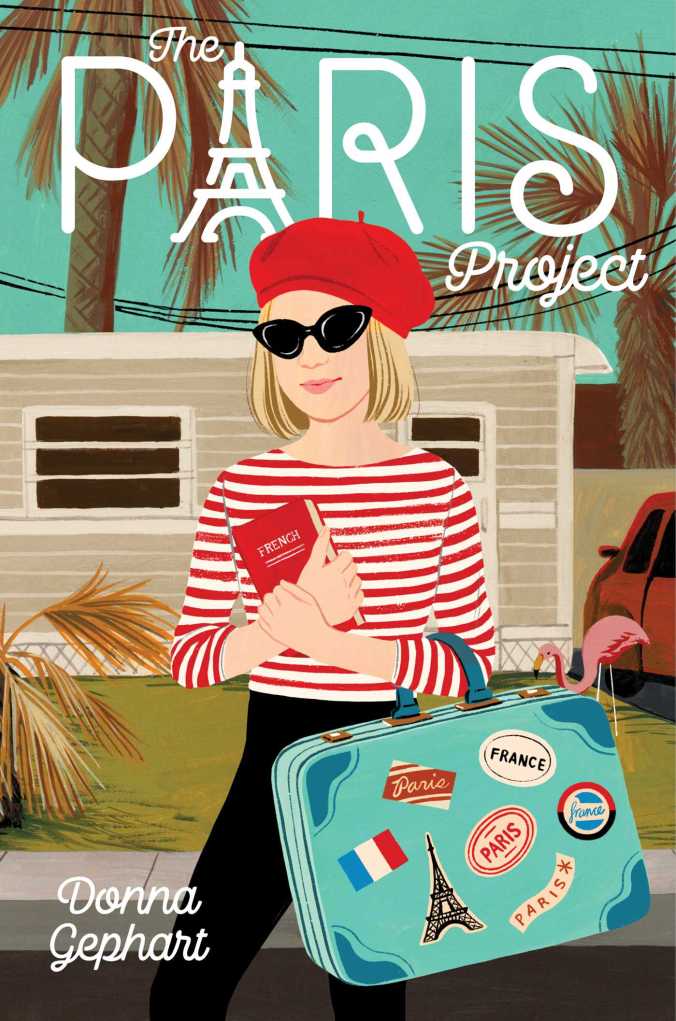 “The Paris Project” by Donna Gephart is an impactful story about the fact that children are not their parents, and that no one should be ashamed of their family because our families do not define who we are.  Gephart’s novels, including “Lily and Dunkin,” and “In Your Shoes,” are about kids who are different and who may be imperfect on the outside, but are perfectly wonderful on the inside.

In this story, we meet Cleveland Rosebud Potts, whose father has just been incarcerated for theft. He also has a gambling problem, and he has betrayed Cleveland terribly by his actions before going to jail. Cleveland’s family lives in a trailer with their rescue dog Roscoe, whom Cleveland insists on calling Miss Genevieve after the French dog in the picture book “Madeleine.”

Cleveland loves Paris, and her most fervent desire is to go to Paris. She abhors her hometown of Sassafras, Florida, and believes that moving to Paris will make everything better. In fact, Cleveland has a list of six tasks, called “The Paris Project,” and once she’s accomplished all six, she will be in Paris, France! The list includes taking ballet class and learning to cook at least one French dish. To that effect, she peppers her English with choice French phrases, she wears a red beret at all times, winter and summer, and she calls her dog walking service “Cleveland’s Parisian Dog Walking.” She is saving all the money she makes from her dog walking service toward spending her 8th grade school year at the American School of Paris, where she imagines life will be perfect.

But life in Sassafras, Florida, is far from perfect. Her father not only stole money from his employer, he stole all the money that Cleveland had been saving from months of dog walking. Her older sister Georgia works feverishly to make money while also studying hard at school so that she can attend the University of Vermont in the fall. It’s her dream school and she is determined to go there. Their mother has been working extra jobs housecleaning to make up for the fact that their father is in jail and not helping with their household expenses. And going to jail to visit her father is horrible because while Cleveland is furious that he betrayed her by taking her money and blowing it at the dog track, she still loves him and misses him.

Cleveland’s best friend from kindergarten, Jenna, is now her nemesis. Once Jenna’s grandmother won a personal injury lawsuit, her family moved out of the trailer park and bought a BMW, and now Jenna feels better than those she left behind in her old neighborhood. Cleveland feels further betrayed by her best friend, Declan, when his new friend is the son of the man who had her father arrested and jailed, his former boss. She doesn’t understand how her best friend could do that to her. Weighty questions will occur to astute readers or those reading as part of a book club: Should Declan’s new friend Todd be made to pay for his father’s actions? Is it right that neighbors in the trailer park as well as school peers judge Cleveland for what her father did?

Gephart’s books always present issues that make for spirited and thoughtful discussions. She explained in an interview with From the Mixed Up Files… that, “We have a big problem with mass incarceration in our country. That’s not news to anyone. What doesn’t get talked about as much is the effect that has on family members still at home. What happens when there is a loss of one income in a household? What happens when it’s expensive to travel to visit a loved one in jail? What happens when a child can’t even touch her parent because a facility chooses to have video visitations instead of in-person ones? Cleveland and her family deal with all these things and more.”

The story also tastefully presents Cleveland’s gradual understanding that Declan and Todd are not “just” friends, and that Declan likes Todd in a way that he could never like her. Gephart’s books make superb choices for middle grade book clubs because of the meaty subjects that she addresses while never, ever making her books preachy. Gephart’s writing is spot on in terms of plot and realistic dialogue, expressing emotions that young people will understand and empathize with, and presenting situations that need to be discussed.

Does Cleveland get to Paris or does she discover that some things are even better than Paris? Read this lovely story and find out.

Please note: This review is based on the final, hardcover book provided by Simon & Schuster, the publisher, for review purposes.