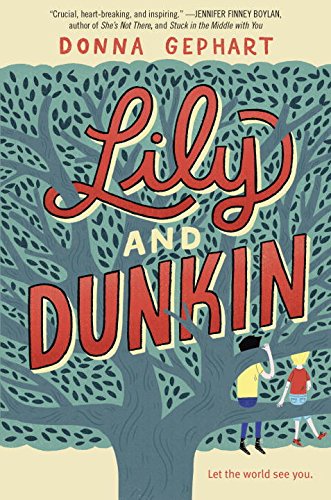 “Lily and Dunkin” by Donna Gephart is a wonderful middle grade/young adult book about mental illness and being transgender. The publisher, Delacorte Press, says this book is appropriate for ages ten and up. This reviewer agrees.

While the topics are sensitive and, at times, difficult to read, the story presents the issues in a matter-of-fact way. While the issues are important — essential even — to the story, Gephart’s characters steal the show. She tells the story in first person narrative from the viewpoints of both main characters, Lily and Dunkin.

The first chapter is labeled “Girl” in script. When the reader first meets Lily, she says, “Lily Jo is not my name. Yet. But I’m working on that.” And she goes on to dress in her mother’s dress and go outside to help her father with the groceries. That’s when the reader learns that Lily Jo is “Timothy” and his/her father is not happy that he/she is outside in a dress.

The next chapter is labeled “Boy” and begins Norbert (Dunkin) Dorfman’s story. He has just moved to Florida and hates the heat. He’s embarrassed about his tall, hairy body so he ventures out in his New Jersey corduroy pants. He’s upset about the move, about living with his grandmother, and — strangely, it would seem — about dying. He ponders all the ways that one might die in Florida. Lightning strike, alligators, poisonous snakes, hurricanes, floods, and more.

The story follows Lily and Dunkin as they  meet during a crucial time in their lives while they are in middle school. Lily is transgender. Gephart beautifully lays out how Timothy has felt like a girl in a boy’s body since she was a toddler. Reading this story, it’s easy to understand and empathize with transgender people. Dunkin also has problems. He is bipolar and trying to deal with taking (or not) his medication. His father’s status is mysterious, but it becomes clear that his father was bipolar and something terrible happened as a result of that disorder. When Dunkin makes the basketball team, he finds that he only performs well when he doesn’t take his medication. But that has disastrous results.

What will Lily do if her father doesn’t let her begin the hormones that will stop her body from turning into a mature male body? She is worried about getting an Adam’s apple, body hair, broad shoulders. She needs to start the hormones immediately, but her father refuses to believe that his son, Timothy, is really a girl inside who needs to also be a girl outside. The seriousness of Lily’s situation is made real when she asks her father why he made a certain decision. He reveals what the psychologist told him about transgender youth, and it’s a statistic that is both astounding and devastating — and true.

Gephart also brings to light the heartbreak and difficulty of dealing with mental illness. Those who are close to people with mental illness know the lack of support and understanding that is rampant in the community. Mental illness is often something that people are ashamed of and try to hide. That can have terrible consequences. Reading about a sympathetic character like Dunkin who suffers from mental illness may help children understand that those who suffer with those issues are still kids just like them.

Both Lily and Dunkin’s personalities seem real and are created in such a way that readers will connect with them, feel for them, and sympathize with them during their troubles and trials. “Lily and Dunkin” is a powerful book. It would be a fabulous choice to read with a middle school class, as it could lead to some powerful discussions. I believe that it could also be a very powerful read aloud.

Please note: This review is based on the final hardcover book provided by the publisher for review purposes.