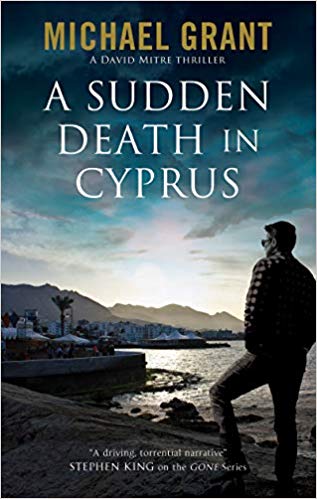 Michael Grant’s first adult novel, “A Sudden Death in Cyprus,” is a convincing demonstration of his unique skill in creating prose fiction of virtually any genre or targeted age group.

In this novel, Grant creates a protagonist who is very much like the author himself. Like Grant, David Mitre (just one of his aliases) dropped out of high school, started a life of crime, and met that perfect woman in the window. Like Mitre, Grant was a fugitive from the law — perhaps that’s why he took a pseudonym as an author. Regarding the Grant/Mitre oneness, Grant explained to me, “Frankly I thought Mitre might be insufferable, so I’m relieved people don’t seem to hate him (me). The Mitre ‘voice’ is a pretty faithful representation of what goes on inside my head.” So it’s not “just” a mystery, it’s also a character study — of the author and what he might have become had he not chosen well in terms of a life partner.

Before Grant’s life of crime began, at the tender age of four, he tried to be a businessman, er, business-child. He wanted money for a toy, so he took a box of vanilla wafers, poured them into a container, and “set off around the neighborhood as the world’s first (and probably last) door-to-door vanilla wafer salesman.” However, he realized that he wasn’t going to make enough money to achieve his goal, so, as he writes in the scene from Mitre’s point of view, “….when I got home I noticed some crumpled bills and loose change on my grandfather’s mahogany chest of drawers. I took the money and claimed it had come from robust Nilla sales.”

Years later, in spite of having dropped out of high school, Grant (and the fictional Mitre) were accepted into college. Both dropped out rather quickly and worked in the restaurant business as shift managers. At one point in both the real Grant and the not-real Mitre’s lives they lived under a viaduct. And both met a girl in the window, the beautiful and talented woman who in real life is Katherine Applegate. The real Grant was intelligent enough to stay with Applegate, and they co-authored the hugely successful Animorphs series after ghost writing a few books and getting some Harlequin romances published. Neither has looked back as they continue to write together and apart with many, many bestselling and award-winning children’s books.

Pity poor David Mitre. He left the girl in the window, and his life has been lonely and fraught with the stress of wondering what law enforcement agencies might be looking for him. Mitre has assumed many aliases, but he now, in the time of this novel, has an alias he likes and a life he enjoys as a writer of mystery novels.

Mitre is living in Cyprus and enjoying the view at a bar when he notices a woman who appears to be watchful in a manner that screams that she’s scared, that something is wrong. He isn’t sure what. But when someone who is obviously not a professional waiter approaches the woman with a bottle of wine, Mitre clearly sees every movement and every moment of the not-waiter’s murder of the middle-aged tourist. Afraid of becoming involved and risking his most-necessary anonymity in a murder investigation, Mitre leaves the scene quickly.

Mitre learns about two illegal activities that are taking place on the island, and he is confronted by FBI agents who want his help in investigating what is going on. It’s puzzling and confusing — who murdered the tourist, an ex-British intelligence agent? And why?

Grant’s writing talent, honed after years of writing young adult action books, shines brightly in this novel. His narrative and distinctive voice are eloquent and often quite lyrical.

“No one ever admits to being asleep, lacking a sense of humor, or having no imagination. Everyone thinks they have an imagination, but few do, and fewer still are capable of pro-level imagination, the kind of imagination a clever criminal, or novelist, might need. Without imagination the first cave men would still be in the first cave, because it takes imagination to wonder what’s over the next hill, or to conceive of a cure for disease, or to imagine strapping on a rocket and flying to the moon. Many good things come from imagination.”

But imagination is to fear as gasoline is to fire.”

In addition to such fine examples of narrative, the story is filled with Grant’s wry sense of humor as Mitre narrates the action in a cleverly self-deprecating manner. “You read stories about warriors — Vikings, Huns, Mongols, Marines — who never so much as whimper while they have a leg cut off with a pair of snub-nosed kindergarten craft scissors, but I am none of those things.”

Mitre doesn’t want to do the right thing. He wants to live his quiet, peaceful life, write his books while getting distracted in attractive ways as often as possible, and enjoy his scotch, a good cigar, and a beautiful view. (Much like the real Michael Grant.) What will he, David Mitre, do when he is forced to choose — his comfortable life or doing the right thing even though it might mean his life will be upended?

Is Mitre a man who is dishonest but might be redeemed, or is he an honorable man who has strayed from the right path and now has a chance at redemption?

Be prepared to travel a lovely and action-filled path along with David Mitre as he struggles with his past, his present, and his nervously iffy future. And once readers realize that there is a sequel to this first “David Mitre Thriller,” they will eagerly anticipate learning more about this complex and fascinating character.

Please note: This review is based on the final, paperback book provided by the author for review purposes.