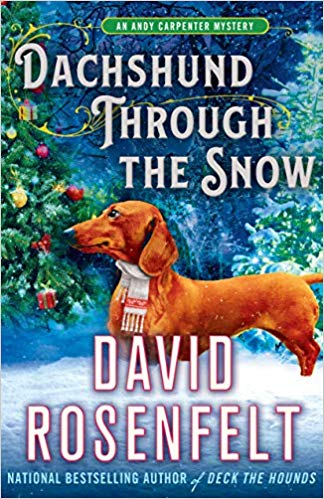 Fans of the “Andy Carpenter” series are going to be thrilled. New readers will be charmed. With “Dachshund Through the Snow,” author David Rosenfelt has added a new canine to the regulars. There’s Tara, namesake of the late real Tara much beloved by Rosenfelt and his wife, for whom they began to rescue many, many senior dogs. Then there’s the basset hound Sebastian, whose gait is tortoise-slow. Now there’s Simon, retired (thanks to Andy Carpenter’s brilliance and his handler’s love) K9. He and his handler, Corey Douglas, will be making return appearances.

But that’s just the beginning of the story. In this legal who-done-it mystery, Noah Traynor, an innocent man (of course all of Andy’s clients are innocent), is accused of killing a teenage girl fourteen years before. The DNA sample that was found under her fingernails is a match to his, and it took fourteen years until Noah’s brother did a DNA test and posted the results online. The police matched the DNA as a close hit and found Noah.

The evidence is against any good outcome in the case. But Andy is nothing if not determined, and after he gets over his determination to not take this case, he and his cast of characters are determined to do whatever it takes to find the truth. The usual suspects show up, including Hike, the perennial pessimist assistant to Andy, Sam, the wanna-be detective who is a tech whiz, and, of course, his fabulous investigator and beautiful wife Laurie. There’s Marcus, who has  saved Andy’s life more than once, and now Simon, the brave and valiant K9 German shepherd who also saves Andy’s life — with the slight assistance of his handler.

As befits an Andy Carpenter mystery, there are twists and turns galore. But the best part of all is the trademark Rosenfelt humor, featuring the sarcastic, self-deprecating narration by Andy Carpenter. When he has his friend Pete, the police captain, testify for him during the trial, Andy narrates:

“I know how much he hates testifying for the defense, because he told me that if I made him do this, he would hunt me down after the trial, shoot me and then feed my body in pieces to a tank full of piranhas.

“Pete and I are really good friends.“

Get ready for another terrific read. Lots of murders. Lots of questions. Plenty of adorable dogs. And lots and lots of humor. As the story takes place over the Christmas season, which in the Andy Carpenter house begins in October and goes through March, it’s a perfect holiday read.

And as the author himself posted recently on social media, “I HAVE HAD IT! The 2018 Nobel prize for literature was awarded to Olga Tokarczuk “for a narrative imagination that with encyclopedic passion represents the crossing of boundaries as a form of life.” HELLO?? HELLO?? That is a perfect description of “Dachshund Through the Snow”. Yet my genius is never acknowledged. ENOUGH IS ENOUGH!!!“

Please note: This review is based on the advance reader’s copy provided by Minotaur Books, the publisher, for review purposes.