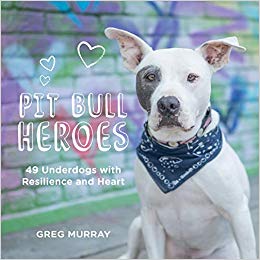 “Pit Bull Heroes: 49 Underdogs with Resilience and Heart” is a paean to pit bulls by talented photographer and writer Greg Murray. As he comments in the “About the Author” section at the back of the book, he is an animal photographer and rescue and pit bull advocate. His first book was “Peanut Butter Dogs,” showing dogs enjoying peanut butter, of course.

In this lovely book that is both a coffee table photo album and a collection of heartbreaking and heartwarming — at the same time! — stories of the dogs whose lives were rescued by humans and who, in many cases, have rescued humans in turn. Each dog has a unique and thought-provoking story about their journey to their present situation, and each story will make readers want to make their next dog an adopted pit bull.

Lexy is a pit bull who for the first eight years of her life was used for breeding. When she was rescued, her chest nearly touched the ground from repeated breeding. She was in terrible condition, and she had never been socialized or walked on a leash. Normal sounds scared her. Yet someone, just one person, saw Lexy and found a dog worthy of love and affection. Jenny’s application to adopt Lexy was the only application they had gotten for Lexy, but it was a perfect match. And even though Lexy was over eight years old when she and Jenny became a family, Jenny wouldn’t trade the last four years for anything.

Adopting a senior dog can be an extremely rewarding experience. One of my dogs, Bentley, was going to be killed by a Missouri Humane Society because at six or seven, no one wanted to adopt him. He was considered too old. Yet for the past nine years, Bentley, who had passed his therapy dog test with flying colors, worked in an elementary school helping children with reading and emotional issues. And even though Bentley himself needs anti-anxiety medication, he was able to help others with their emotions. He is retired now, but continues to run and bark at strangers and even his family when they arrive home. Adopting a senior dog is a fabulous experience. Older dogs can be calmer; they are usually past the chewing stage. And housebreaking, if needed, is quick because they get it much more quickly than puppies.

Another dog, Meryl, is heartwarming story because she is one of the dogs rescued from the infamous Michael Vick dog fighting operation. Originally, all of the 51 dogs rescued were going to be killed, as at that time dogs who were used for fighting were considered dangerous. Even the Humane Society of the United States advocated for their deaths. But a few rescue organizations including Best Friends and Bad Rap rescue advocated for each dog to be tested to determine whether they could be rehabilitated or not. In fact, of all the dogs, only one was determined to be so damaged psychologically that it was euthanized. All the others were either ready to be adopted into homes or ready to go to a rescue to be rehabilitated. There were only a few dogs who were determined not to be adoptable and required to live at a sanctuary for the rest of their lives. Meryl was one of those dogs. But as Murray explains, Meryl has had a wonderful life at Best Friends. In fact, I got to see her many years ago, from a distance, as she lay in an office with a friend. She was one of the lucky ones. Other dogs rescued from dogfighting situations do not fare as well.

There are many more very moving stories: Penny, who spent the first year or more in a basement being verbally and physically abused. Ashley, who is one of 367 dogs rescued from the second largest dogfighting bust in history. James, who was found roaming the streets of Cleveland and had been not only hit by a car, but also beaten by a group of men and left with severe injuries. Acorn, the pit bull puppy who a foster realized is deaf and has learned sign language. Each story is inspiring and motivating; rescue a dog and feel the love.

This beautiful book would be a great gift for any dog lovers or someone thinking of getting a dog. It would look wonderful on a coffee table. It’s filled with inspiration. Donate a copy to your local school and get students reading about rescue and pit bulls. Read just one of the stories and it’s guaranteed to make you smile and put a little happiness in your heart.

Please note: This review is based on the final, hardcover book provided by Greg Murray for review purposes.