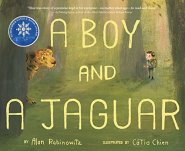 Two of these books are new releases, and two are simply picture books that deserve to be shared and widely read. Two are about domestic animals, dogs, and the two nonfiction picture books are about wild animals and how two brave, resourceful people became determined to help them. All are fabulous choices for every home and school library.

Two nonfiction picture books that should become classics are “Jasper’s Story: Saving Moon Bears” by Jill Robinson and Marc Bekoff and the semi-autobiographical “A Boy and a Jaguar” by Alan Rabinowitz. Both books are about brave people dedicating their lives to helping animals, and both are fascinating to children of all ages. I’ve read these books with first graders and fourth graders, and each child appreciated each book on a different level.

“Jasper’s Story: Saving Moon Bears” is the story of moon bears and one woman’s journey to save them. It’s about Jill Robinson and one bear in particular, Jasper, whom she rescued

from a bile farm. He arrived bone thin, and his teeth were worn down from years of chewing at the bars of his small cage. Because he was unable to move in his tiny cage, his muscles were weak and wasting away. After surgery to fix Jasper’s many injuries, he awoke in the sanctuary, a place where he could stand up and walk for the first time in many years. While Jasper’s body healed, he began to trust his caretakers. When the bears first arrive at the sanctuary, they are frightened and wary of humans who had done nothing but bring pain and captivity to them their whole lives. For the first time, humans are showing kindness to Jasper, but it takes a while to forget the pain and misery of the past. The book tells the story of Jasper’s rehabilitation, and of Robinson’s dedication to end the cruel practice of using bears to “farm” bile through her organization AnimalsAsia. The illustrations by Gijsbert van Frankenhuyzen are filled with texture and color, and the text is detailed but also expressively presented. (Sleeping Bear Press)

“A Boy and a Jaguar” by Alan Rabinowitz is another nonfiction picture book that will inspire readers to think about wild animals in a different light. It’s about a boy who loved to visit a jaguar at the Bronx zoo. He’d whisper to the jaguar and wonder why this

magnificent creature was in a barren cage. But Alan stuttered, and the rare times he didn’t stutter was when he was talking to animals. He writes, “I tell them my dreams. I tell them that I want to be able to speak like everyone else. I know that my pets listen and understand.” He explains that because animals can’t talk, “People ignore or misunderstand or hurt them,” and that because he can’t speak well, the same thing happens to him. He makes a promise to his pets and tells them that if he ever finds his voice, he will be a voice for the animals and keep them from harm. The story follows Alan’s life as he studies black bears and then goes to Belize to study jaguars. When reading this book to children, it’s a wonderful opportunity to discuss why when Alan had to convince the prime minister of Belize to create a sanctuary for the jaguars, in spite of his stuttering, he was able to do so. And at the end there is a touching encounter with a jaguar. The story is beautiful and real. Like “Jasper’s Story” and the fictional “Hey, Dog,” this story is about how animals often need a dedicated and inspired person to save them, and the author makes it clear that each and every student reading books like these has the chance to do something important. (Houghton Mifflin Harcourt)

“Hey, Dog” is by Tony Johnston, an author who is one of my

favorite children’s authors. She has written “The Cat with Seven Names” and “Any Small Goodness,” both of which I use each and every year with my students. This book, “Hey, Dog,” will certainly be one that I will use with students from kindergarten through fifth grade. Maybe I love this picture book because it’s about me. Okay, it’s not really about me, but it’s about every animal lover, everyone who has rescued a dog, everyone who feeds a sad animal and tries to help it, and everyone whose heart bleeds for all the animals we can’t help. The first person narrator, a young boy, finds a dog hidden in the bushes on the way home from school. The dog is skinny and frightened. The boy tries to help the dog, and the way that he does it will melt the heart of dog lovers and dog rescuers — because he gets it just right. He feeds the scared dog. He leaves his baby quilt and water for the dog. He talks softly to the dog, and he describes the scars on the dog’s thin body. He moves slowly. And when the boy says “Hey, Dog. Hey. It’s me,” and the dog cringes, afraid he’s going to be hit, the boy cries along with all of us at the cruelty of humans. This book is not merely entertaining, it’s educational, it’s touching, and it’s a love story about the beauty and rewards of rescuing an animal in need. The illustrations by Jonathan Nelson are perfect complements to the story, with bright colors and a boy who is drawn simply but whose eyebrows express a world of emotion. (Charlesbridge)

century, and the dress is formal and the illustrations very stylized. But the names and the pooches are amusing — Augustus Pennyfarthing and his owner, Sir Archibald Pennyfarthing; Mr. Pemberton and Little Alexander Wallace (guess which is the dog and which the human); Freddie McDarrow and Ernie; and Cordelia Vanderlay and Fluffernutter Vanderlay. Some of the dog resemble their humans and some do not, but the narrator points out that no matter the looks, she can “always tell they are best friends.” The illustrations are ornate, and all the humans (and a few dogs) have round pink cheeks. The twist at the end is adorable! (Page Street Kids)

These books are magnificent tools for teaching children compassion for animals, and how one person can make a huge difference. If the students learn that every one of us can, and should, help any animals we see in danger or in pain, it’s an important lesson well learned.

Please note: These reviews are based on the final, hardcover books provided by the publishers for review purposes.