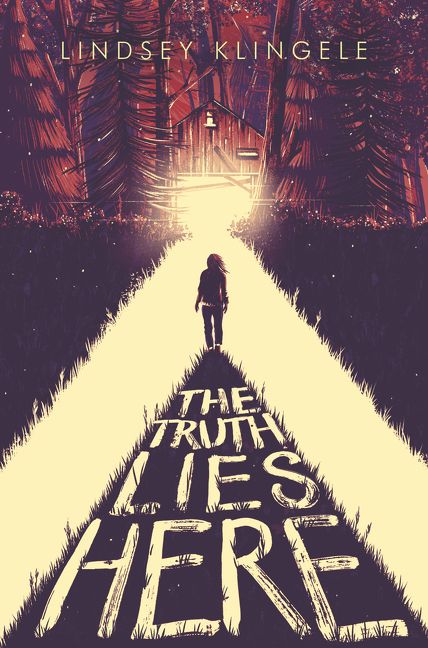 “The Truth Lies Here” by Lindsey Klingele is almost like two stories. One story is about mysterious disappearances and deaths in a small Michigan town. Bodies burned almost beyond recognition are found, and the reader meets two of the victims just before they are brutally killed — or rather burned — in the first pages.

But when Penny Hardjoy arrives back in Bone Lake to spend the summer with her father, the bodies haven’t been discovered. In fact, her father doesn’t show up at the airport, so her neighbor and childhood friend Dex comes to get her. Penny and Dex have been friends since they were toddlers, and yet when Penny’s parents got divorced and Penny moved to Chicago with her mother, she and Dex drifted apart. The few weeks she spent in Bone Lake each summer with her father didn’t leave much time to reconnect with childhood friends. And her former best friend, Reece, hasn’t spoken to her for years since Reece thought Penny was lying about an event.

But starting with the disappearance of Penny’s father, things are becoming strange in Bone Lake. As Penny questions the townspeople about the closing of the town’s only industry, a factory that shut down, no one seems to really have any answers. And Penny was counting on writing up an investigation to use for her application to Journalism School at Northwestern University. In fact, strangely, the people she talks to all use the same phrase when saying that they don’t really want to discuss the plant’s closure. “It’s best not to think about it too much.” Eerie.

When Dex and Penny start to investigate what is going on, things get even stranger. Two FBI agents are in town. Penny and Dex finally find her father’s notes in his safe, just before the FBI agents appear at her door and take them away. And at the same time, Penny is exploring her feelings for her father, and her feeling that he let her down when she was a child who believed all his stories about the Loch Ness monster and aliens and Bigfoot.

The investigation gets more and more frightening. What are the strange white lights? How did the hiker and the two teenagers get burned to death? What is in the basement of the shuttered factory? Why do people in town not remember what happened at the factory when another childhood friend, Micah, lost his father in an accident that was the reason for its closure?

Klingele builds up the suspense slowly, and the reader will certainly feel on edge as Penny and Dex take risks to find out the truth of what is happening. And when the truth is finally revealed, it’s not anything that the reader might have expected. The author creates twists for both stories, Penny’s personal quest for truth and the investigation into the town’s mystery. The excitement and action is enough to keep the reader turning the pages, especially in the second half of the book. Things are certainly not what they appear to be in Bone Lake, Michigan. And it’s fun finding out why.

Please note: This review is based on the final, hardcover book provided by HarperTeen, the publisher, for review purposes.