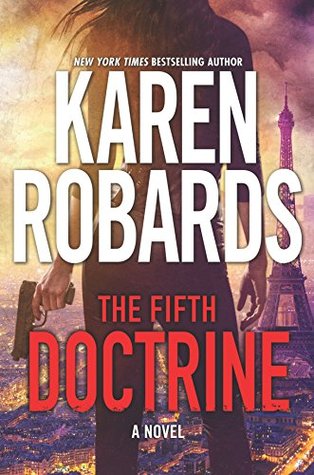 In “The Fifth Doctrine,” author Karen Robards takes an action-filled plot that has a few twists and turns and creates a book that is gripping, touching, and ultimately an extremely satisfying read. There are a lot of chase scenes and a lot of mistrust and chicanery, and this third book in “The Guardian” series about Bianca St. Ives is a really fun read.Bianca is enjoying her life in laid-back Savannah, enjoying her friends and her private security business. Then her nemesis, Colin Rogan, appears in her office. That’s the first tip-off that those in the intelligence community know who she is and where she lives. And some in the CIA want her dead because she is the last in a failed experiment in genetic engineering that was discontinued. The fact that Bianca is physically and mentally superior to most normal people works to her advantage, except no one, including even Bianca, can outrun or outsmart a concerted CIA operation designed to kill her.

Rogan offers her a way out, but to get there she has to take a covert job for a consortium of intelligence agencies from five countries. And while selling what appear to be state secrets to North Korea, she also has to avoid the hit squads who are trying to get rid of her or who are trying to steal the state secrets that she’s selling. Bottom line is that it’s Bianca and Rogan against the rest of the spooks. Staying alive was never so challenging.

Robards’ writing is in top form. The action scenes are thrilling, and the romance between Bianca and Rogan is perfectly played. How do you fall for someone you don’t think you can trust? And that works both ways, and the reader feels for Rogan, who is falling for Bianca hard. Even though he can’t trust her, either. And then there’s her father, an ex-CIA and career criminal, who is really high on the CIA hit list, and whom even Bianca isn’t sure she should trust. But he taught her everything she knows, and she still cares for him. It frustrates her that she doesn’t know if she can trust him.

The plot winds around perfectly, and the book is filled not only with thrills and excitement, but also with a nice slice of humor. Her relationships definitely grow more complex in this book, and that’s a wonderful part of the story. Bianca finally shows some vulnerability here, and that’s an attractive quality that will only make readers like her more.

Please note: This review is based on the final, hardcover book provided by the publisher for review purposes.