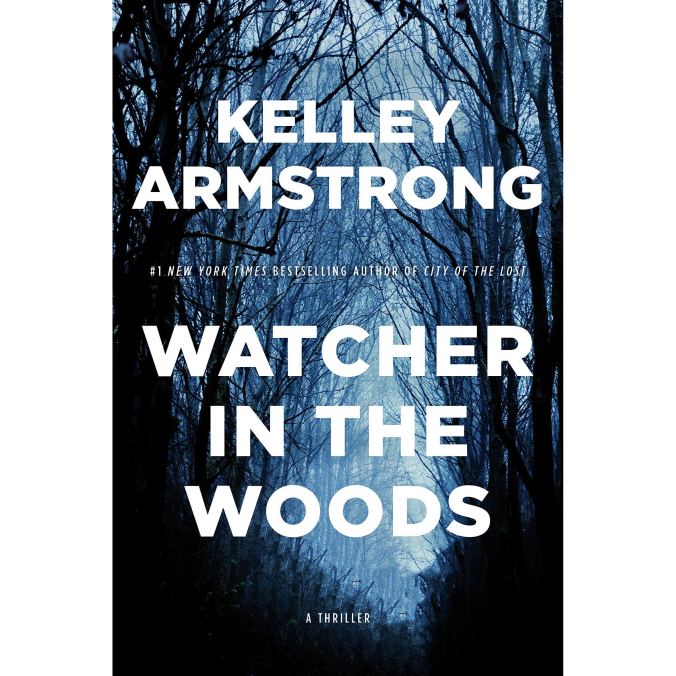 “Watcher in the Woods” by Kelley Armstrong continues her “Rockton” series set in the fictional “town” of Rockton, in the Northern Yukon in the middle of thousands of miles of wilderness. Mixed in with the wild, the tundra, the vicious animals, and the cold is the primitive town of Rockton, where fugitives from society live. Some are victims seeking to flee their abuser(s) while others are criminals seeking to escape justice.

When Casey arrived at Rockton to be the first detective, it didn’t seem like it would be a very difficult job. There just aren’t that many residents in Rockton, and there are no visitors. Once you arrive at Rockton, you are there for a minimum of two years and you have to ask for an extension to stay longer. Permanent residents are rare. The place is extremely well hidden from view, and there are no roads that go there.

But there have been plenty of crimes for Casey and her boyfriend/boss, Sheriff of Rockton Eric Dalton, to investigate. In this book, a US Marshal appears outside of town looking for a fugitive. He won’t tell Casey and Eric who he is looking for because he suspects that they will hide that person to protect him or her. He does give them a few clues, but then he is murdered. Now Casey and Eric must find out which resident killed the marshal and stop that person before more residents die.

There are many suspects, including Casey’s estranged sister who came to Rockton to help with a medical emergency. And it’s only been a few weeks since the last killing (detailed in the last book, “This Fallen Prey,” so they are still dealing with the fallout from that situation.

Because of the complex characters and the wonderful setting, it’s probably a series that should be read from beginning to end. That doesn’t mean that this couldn’t be a stand alone book, but rather that to fully enjoy it, knowing the backstory of the town and the inhabitants helps. Casey’s character is one that is very complex, from her wealthy but very stressful childhood to her huge mistake — killing an ex-boyfriend — that changed her life forever. Reading the first book, “City of the Lost,” gives the reader important information about Casey and the town of Rockton, her relationship with the friend that she accompanied there, Diana, and the other inhabitants.

With each new book about Rockton, Armstrong shares more and more about the residents and the others who live in the area. There are the “settlers,” those who left Rockton after their time expired but who did not want to return to society, and those who have gone “wild,” or feral, and become something less than human. These people have even lost their ability to communicate and live very primitively. They are very scary, and it’s a mystery why they changed so much – and so quickly – after leaving Rockton.

Armstrong is a very talented writer, and after reading this, the fourth book in the series, readers feel as if the characters are friends. Expect to wonder occasionally how Casey is doing up there, and more importantly, when Armstrong will come out with a new book to update us on Casey’s life and the Rockton scene.

Please note: This review is based on the final, hardcover book provided by Minotaur Books, the publisher, for review purposes.