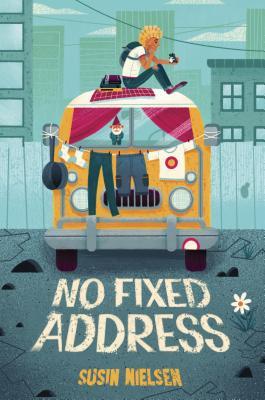 “No Fixed Address” by Susin Nielsen grabs the reader from the very first page. Felix Fredrik Knutsson, the almost-thirteen-year-old main character is at a police station answering some basic questions. Name, age, mom’s name, address? But that last question — address — is not an easy one to answer.

Felix and his mom Astrid have been living in a van for the past four months. And what begins as his answers to the constable’s questions (the story takes place in Canada), ends up being the story of Felix’s life. It’s not been an easy life as Felix’s mother suffers from an inability to keep a job, no matter how menial. After she loses her job teaching painting, jobs come and then invariably go. At a coffee shop, she snarls at a customer. When a customer at a bar where she is serving drinks gets fresh, she throws a drink at him.

When her boyfriend leaves to go to India, and the landlord evicts them for nonpayment of rent, Astrid and Felix end up living in the ex-boyfriend’s van, which Astrid told Felix was a gift from him. It wasn’t. That was just one of Astrid’s many lies. In fact, she tells so many lies that Felix has a clever system for categorizing lies. This alone is grist for a long classroom discussion on lies and when — if ever — it’s okay to tell a lie.

The narration by Felix is flawless. He’s a very intelligent almost-teenager and while he sees  some things quite clearly (like his mother’s lies and the fact he hates living in the van), he relies on his mother’s information about other things (like getting help from social services for their predicament) and she is just as clearly an unreliable source about that kind of information.

Once hooked into Felix’s story and his predicament, the reader has no choice but to read and read and read to find out what happens. This is not an action story, but in a different sense the action never stops. Felix’s story is touching and heartrending. I dare any adult reader to finish without shedding at least one tear. Kids will learn about why some children, through no fault of their own, end up homeless. And there is one scene when Felix is wearing a shirt they got from the thrift store and they kid whose mother donated it recognizes it — that scene is emotional gold.

There are some references in the book to situations where younger readers will not entirely know what is going on. When the father of a friend of Felix’s happens to be at their apartment during the day when Felix arrives home sick, Astrid is wearing a bathrobe. She gives Felix an explanation that doesn’t really make sense to him. Felix’s mother unabashedly steals from stores and friends. Touchingly, Felix keeps track of her thefts, at least the ones he is aware of, so that he can pay the stores back when they have money. Astrid suffers from depression, which Felix refers to as a “slump” and takes medication for it, but when she has to chose between medication and their phone bill, the phone bill gets paid.

This novel would be — should be — a fabulous choice for a fifth or sixth grade read aloud. It would also be a great book for a class to all read and discuss. The issues in this story are important and potentially eye-opening for many students.

Another great book about homelessness for younger readers is Katherine Applegate’s “Crenshaw.” This book is a perfect follow-up read for older readers.

Please note: This review is based on the final, hardcover book provided by Random House Children’s Books, the publisher, for review purposes.