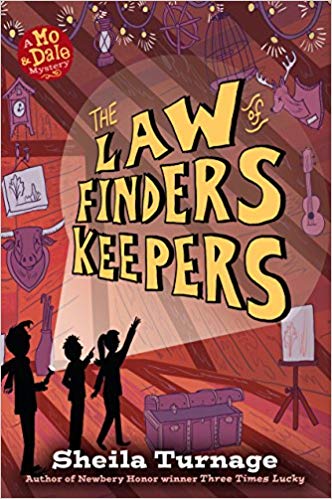 “The Case of Finders Keepers” by Sheila Turnage will keep fans of Mo LoBeau thrilled at the details that are unveiled about Mo’s Upstream Mother and Blackbeard’s treasure that they seek in this fourth book.

Moses, so named because she was found after a hurricane swept her into the arms of her rescuer on a huge wave of water and a large sign, has been writing to and searching for her Upstream Mother for a while. She writes to her, but luckily, Mo has the love of Miss Lana and the Colonel which whom she lives. They run a café where Mo serves and impudently garners big tips.

The series is filled with huge characters who are so beautifully described that they become real to the reader. Lavender, in spite of his floral name, is both handsome and Mo’s future husband — as she informs him every time she sees him. Her best friend, Dale, is joined by another new and good friend, Harm, in this new adventure.

When a handsome stranger rolls into town with clues about Blackbeard’s treasure being buried in Tupelo Landing, Mo and her fellow detective Desperados take note. If anyone is going to find the treasure, it’s going to be them.

The story has twists and turns and lost and found clues, pirate maps, and just maybe, Mo’s chance to find her mother. Turnage puts it all together wonderfully, and fans will not be disappointed at how this series ends.

Readers will realize, just as Mo and her friends do, that family is not just who shares your blood. It’s a bond that is formed when people love, respect, and truly care for each other. Not all mothers sacrifice for their children, yet there are many who would sacrifice their lives for their kids. Others can be mothers to children without having given birth. Readers will also learn about friendship and the inarguable fact that people can change. An enemy can become a friend, and forgiveness is important.

Lots of wonderful messages in all the books in this series. Don’t start with this one; be sure to get the first three and read all four! Kids will like the folksy dialogue and the action-filled plots. Adults will like the lessons that Mo and her friends learn. It’s a win-win.

Please note: This review is based on the final, hardcover book provided by the publisher, Kathy Dawson Books for Young Readers, for review purposes.