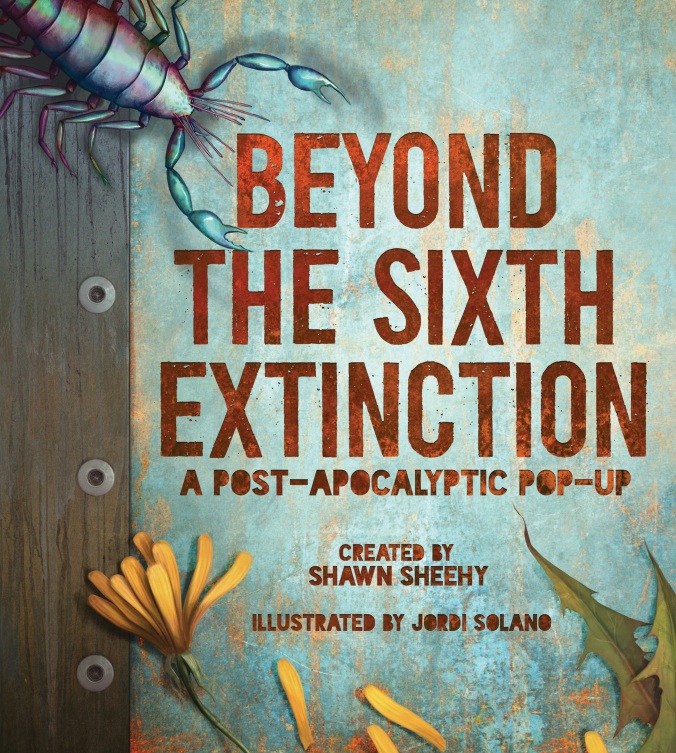 “Beyond the Sixth Extinction: A Post-Apocalyptic Pop-Up” created by Shawn Sheehy and illustrated by Jordi Solano is an imaginative and clever peek into what might become of our world in the year 4847, after the sixth global extinction has happened.

This clever pair created new species from old ones — creatures that adapted to the new ecosystem after environmental disasters and world-wide destruction of wildlife. It’s a new world.

Not only are the pop-up creatures brilliant, readers will love the fascinating information included regarding each creature. The brownfield pigeon has evolved to be twice the size of other pigeons and become a predator. The birds have evolved to have brood pouches for their young because of the dearth of places to perch or build nests.

There is a plant that shifts to a grub that crawls to a new location to take root. This creature resulted from bioengineering to merge dandelion and cabbageworm genes, but the new genetically modified creation was not contained, and because of the creature’s insatiable hunger for calcium, which it found in concrete, a new building material needed to be used.

The introduction (in the form of a memo) explains that the 35,000 square kilometer area southwest of Lake Mishkin was thought to be lifeless, but a recent survey discovered many new species. It explains:

“How rapid is this rapid evolution? The rotrap in this guide evolved from the common house mouse (Mus musculus) in just two thousand years. Modern humans required 6.75 million years to evolve from the common ancestor (Sahelanthropus tchadensis) they shared with the chimpanzees.”

The memo continues to explain two key factors for the rapid evolution. One are the tropical temperatures (so, if this is Lake Michigan’s vicinity, that’s a huge climate shift), and the other are the high levels of background radiation.

All in all, it’s a beautiful-but-scary, and at the same time intriguing book filled with amazing artwork, fantastical and futuristic creatures, and detailed scientific explanations for it all. This is a book that transcends age groups. Kids will be riveted by the intricate pop-up creatures. Adults will enjoy the pop-ups, but they will also love the science and will be intrigued — and maybe terrified — by the vision of a rather bleak future. For “the person who has everything,” this would be a great gift. It’s unique.

Please note: This review is based on the final, pop-up book provided by the publicist for review purposes.