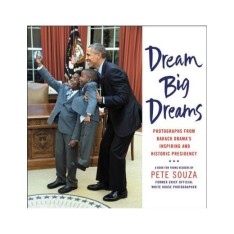 With the increase in diversity in children’s books, there is a plethora of wonderful books for children of all ages that are perfect picks for February and the celebration of Black History. 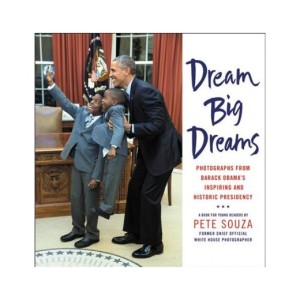 Presidency” by Pete Souza, the former chief official White House photographer, is a beautiful book filled with touching and insightful images of a president who could be solemn when the occasion called for it, caring when compassion was needed, loving with his family, and fun when children were involved. The images show a man who wasn’t afraid to be real with people and to show them that he cared. The photographs show a man who radiates confidence and charm. It’s a really lovely book. (Little, Brown and Company Books for Young Readers)

“A Child’s Introduction to African American History: The Experiences, People, and Events

that Shaped Our Country” by Jabari Asim is a substantial book filled with much information about the history of African Americans from before the beginning of our country until current times. And the information included is quite current, including controversial shootings like Tamir Rice and Philando Castile. It’s impossible to include everything that this amazing book covers, but it would be even more difficult to think of something important regarding African American history that this book left out. In addition to the range of information presented in this book, the physical presence of the book is also beautifully done. The pages feel slick and thick, and the colors of page borders and illustrations are tasteful but eye-catching. Even the Contents page is bordered by what appears to be an African-inspired fabric design, and different chapter headings are highlighted in lavender. This is a book that should be a standard in every classroom and school library from coast to coast and from fourth grade through middle school. (Black Dog & Leventhal Publishers)

“Little Leaders: Bold Women in Black History” by Vashti Harrison is a picture book for older readers with lots of information about forty inspirational African-American 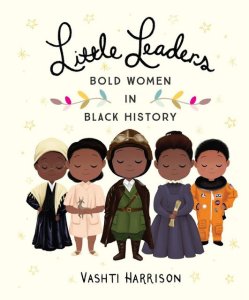 women who throughout history have been models for others. Those profiled range from Harriet Tubman to pilot Bessie Coleman, lesser-known storyteller Zora Neale Hurston, and mathematician Katherine Johnson. Harrison’s illustrations of the women are stylized and the faces are the same smiling, eyes-closed rounded circles on each page with the clothing and adornments changing depending on the profession of each woman. Marcelite Harris, who became the highest ranking black woman in the entire Department of Defense and the highest ranking woman in the air force, wears a uniform and earphones, and carries a wrench. Mary Eliza Mahoney became one of the few black nurses in the late 1800’s, and she wears a nursing cap and apron. There are twelve additional “Little Leaders” at the end of the book. This is another must-have for libraries and elementary school classrooms. (Little, Brown and Company Books for Young Readers)

“Coretta Scott King,” from the series “Women Who Broke the Rules” by Kathleen Krull,

tells the story of the woman who was born  in a farming community in Alabama just sixty years after slavery had ended. But there were “Rules” that all blacks had to follow: sit at the back of the bus, don’t try to vote, don’t use the “white only” drinking fountain or bathroom, don’t use the city parks or pools. The story is about Coretta Scott King, but it’s also about life during that time of Jim Crow. The book is filled with fascinating episodes about her life that most readers will not have known, like the fact that she was a classical concert singer. This is a biography that should most certainly be on the bookshelves of school and public libraries as well as classroom bookshelves. It’s filled with interesting facts, all of them presented in a very accessible manner for children from third grade through middle school. (Bloomsbury Children’s Books)

For a perfect segue from nonfiction to fiction, the picture book “Blacksmith’s Song” by Elizabeth Van Steenwyk bridges the two genres with a fictional account of a blacksmith’s 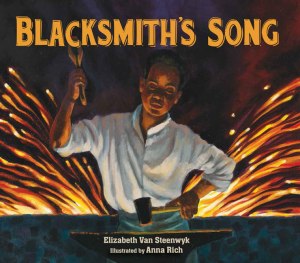 song guiding slaves to freedom, which is based on known methods of unwritten communication during that time. It’s the story of an enslaved blacksmith’s son. He knows that his father often taps out the rhythm that guides escaped slaves to freedom, and he yearns for the time when he, too, will be able to do that. The story unfolds as his father gets ill, and the boy, who narrates the story, takes up the anvil. He hears the music from the party the white folks are having and says, “But another rhythm beats in my heart and soul, just like it does in Pa’s and did in his pa’s before that. I strike the anvil and send the message to those waiting in the woods, who are hoping to hear the blacksmith’s song.” The illustrations, done in oil by Anna Rich, complement the story. They are dark, but it was a dark time. The sparing use of light in the illustrations brings home to the reader the precarious times and darkness of the slaves’ situation. The Author’s Note at the end provides factual information about the underground railroad and the kinds of communication that are theorized might have been used to help guide the escaped slaves to freedom in the north. (Peachtree Publishers)

“I Walk with Vanessa: A Story About a Simple Act of Kindness” is by the husband and

wife team Kerascoët. It’s a story told with very simple illustrations and no words at all. The illustrations and the expressions on the faces of the characters and the colors used tell the story more powerfully than if text had been included. It’s about a new girl, Vanessa. The reader only knows her name because of the title. She doesn’t know anyone, and at the end of her first lonely day at school, she is bullied by a boy. A girl watching is disturbed by what has happened, and she spends all afternoon and night thinking about what to do. What follows is beautiful and lovely in its simplicity. It’s a story that everyone of every age can relate to. This is not a black or white story, but the diversity of the characters is what makes this a picture book to be included for reading during Black History Month or any other  month of the year. Because of the strong visuals, it’s really appropriate for children of any age — from two to twenty. (Schwartz & Wade Books)

“Grandma’s Purse” by Vanessa Brantley-Newton is simply a picture book about a girl and her grandmother and the adventure the granddaughter has searching the treasures to be found inside of the massive purse of many colors. Like “I Walk With Vanessa,” this story is perfect for inclusion during Black History Month because the characters are African-American, and there’s a need for picture books that children can read wherein the characters are people of color — whether the reader is white or black or any shade in between. (Knopf Books for Young Readers)

Please note: This review is based on the final, hardcover books provided by the publishers for review purposes. All children’s books are donated, mostly to schools in underprivileged areas.