It’s been a long journey for Chloe, a Shiba Inu mix, from the dusty streets of rural China to the spacious fenced-in backyard of a suburban Chicago home. But now she has a home and a best friend.

When she was taken off the streets in rural China at six months of age, she had already been hit by a car, abused by children and adults alike, and become scared and aggressive toward other dogs. But ‘Hey Baby,’ as she was called, was still one of the lucky ones.

She lived in a shed with around 15 other dogs. Each morning, the dogs were fed and let outside into a small fenced, concrete area for the day. Each evening they were fed again, and shut up in the shed. The shed was unheated in winter, so the dogs with little fur suffered in the cold. In the summer, with the fierce Chinese heat, the dogs with ample fur like Hey Baby suffered from the lack of cool air.

An American couple living in China, Dr. Abigail Kopelman and her husband, Dr. Clark Kopelman, decided to foster a dog after the six-week-old puppy they had rescued from a parking lot died. The puppy died from distemper after a week of expensive treatment at the local vet. The couple reached out to one of the few rescue groups in China, a group located in Shanghai. They referred the couple to Vivian, a woman who single-handedly tried to rescue as many dogs and cats as she could.

“Please take this one,” she told them. “She is aggressive around other dogs when I feed them.” So they took the four-year-old Shiba Inu mix and named her Chloe. They hadn’t thought about what they would do

Chloe and Rollo in their Suzhou apartment

with Chloe when their year-long visit was up, but when they found another puppy in the streets the day before they were due to get Chloe, they knew they’d have to figure it out. The lucky puppy, named Rollo, was a small terrier mix. After his period of isolation at the nearby veterinarian’s clinic, he and Chloe became friends.

They played together, and she helped house-train Rollo. The couple then began their research into how to bring the dogs to the United States. It was a lengthy and expensive process.

Much of the money for such trips is in bureaucratic fees and veterinary visits. Although the dogs had been vaccinated, and there was proof of the vaccinations, the dogs had to be seen at the “government approved” veterinarian’s office in Shanghai a month before the flight, and then, two weeks before the flight, had to be given shots and checked. Paperwork costs thousands of dollars. They paid for the services of a company to make sure that all the paperwork was completed correctly — for an additional hefty charge.

A few days before the dogs were scheduled to leave for America, they found a friendly ginger cat in the streets. It was too late to send him with the dogs, but they managed to find a friend who adopted him. The Kopelmans paid for the cat’s neutering and vaccinations, and he is a beloved member of a family.

In China learning about love

In the meantime, the dogs grew more comfortable in their surroundings. But when a relative of the Kopelmans’ came to Suzhou to take the dogs back to the United States, Chloe barked nonstop for four days. The trip to the United States was a long flight for the two dogs shut up in dog crates for over 20 hours. Even when they arrived, they had to stay in the cages through customs.

Rollo was adopted by an elderly couple whose daughter had two adopted children from China. It was a match made in heaven — the couple doted on Rollo and the grandchildren visited every day to play with him.

Chloe’s life has not been as easy. She needed surgery for her leg, which had been injured when she was hit by a car as a puppy. It healed poorly, and the bones were bending and not stable. Before the operation, the Kopelmans were told that Chloe had “end stage” arthritis in both shoulders as a result of the accident. The specialist didn’t know how long she would be mobile, even with the surgery.

During the long recovery from the surgery, Chloe became slowly accustomed to life in America. She learned to get along with her many dog and cat housemates. And when her cast was removed, she reveled in running back and forth in the large yard. It was definitely the first time she had been able to run freely — and safely — for many years.

Chloe’s life has continued to be filled with medical issues. She was rushed in for emergency surgery for pyometra within her first year in America. This would certainly have been a death sentence if she had remained in China. She often limps on her bad leg — and recently was operated on yet again. This time the plate that was put in to stabilize her leg was removed. It had broken (perhaps from her constant need to run) and the screws were loose. She has a front-end wheelchair ready for the day that she can’t use her front legs.

But in the meantime, Chloe lives for two things: She relishes running from fence to fence, chasing squirrels and rabbits. Even in the winter, with the ground blanketed with snow, Chloe can be seen racing across the white expanse. She equally loves sleeping on the bed (the only dog allowed to do so). She makes sure that her body lies against — almost on top of — the nearest leg.

And in just the past few months, after almost four years in America, she has found a best friend. Lexi, a dog recently rescued from the Redland area of Florida, was a foster failure in Chloe’s home. The two dogs play tug-of-war together, love to share Lexi’s small crate, and run together in the backyard. They even, unfortunately, once played tug-of-war with a rabbit that one of them killed.

While Chloe may still limp and be in pain at times, she has come a long way. Four years ago, visitors to the house would be “greeted” with Chloe’s barks of suspicion for hours at a time. Now, all visitors are greeted with a short bark and Chloe jumping on their legs for petting.

She has a home, a family, and a best friend. What more does any dog — or person — need? 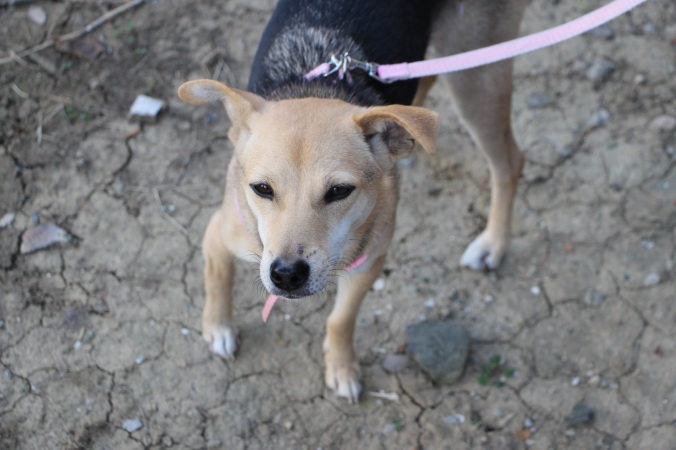