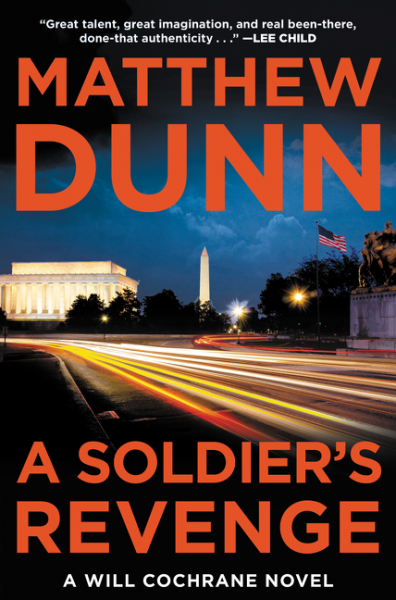 “A Soldier’s Revenge” is one of the “Will Cochrane” series of novels by author Matthew Dunn. Dunn is more than your typical writer who creates spy stories — he actually lived them. Dunn spent five years in MI6 and was the recipient of a very rare personal commendation from the government for one particular mission. In all, he conducted around 70 successful missions for MI6. So Dunn knows what he is writing about, and that knowledge jumps from every page to assure the reader that the actions and characters are certainly realistic.

In this story, the protagonist, Will Cochrane, has resigned from the military and is on the verge of adopting twin boys who were orphaned when their parents were killed. Their father had been a colleague. But before he can finalize the adoption and get the children, he wakes up in New York’s Waldorf Astoria covered in blood and finds a strange woman shot in the head in the bathtub of the hotel room. He has been framed, and for much of the novel he is trying to elude those who would capture him, to figure out who framed him, and to decide what to do about the whole bloody mess.

In the meantime, more people are dying and Cochrane is being blamed for the new killings, too. The reader learns that more than one person wants Cochrane dead, all for very different reasons. Dunn cleverly allows the reader access to the thoughts of many characters, and while most of the story is written in third person narrative, Cochrane tells his own story in the first person. It keeps the narratives clearly identifiable, and Cochrane’s voice is an important part of the reading experience. His grief and his emotions are clearly communicated through his narrative.

For anyone who enjoys thrillers, this is sure to please. Those who have read the previous novels involving this character will enjoy it even more, but it surely works as a stand-alone. This reviewer has not read any of the previous books but did not suffer in the least because of that lack. However, some of the characters presented in this story might have been introduced in previous ones, and their stories are intriguing enough that new readers will want to go back and start at the beginning to learn all about Will Cochrane, his friends, his enemies, and his life.

Please note: This review is based on the advance reader’s copy provided by the publisher, William Morrow, for review purposes.