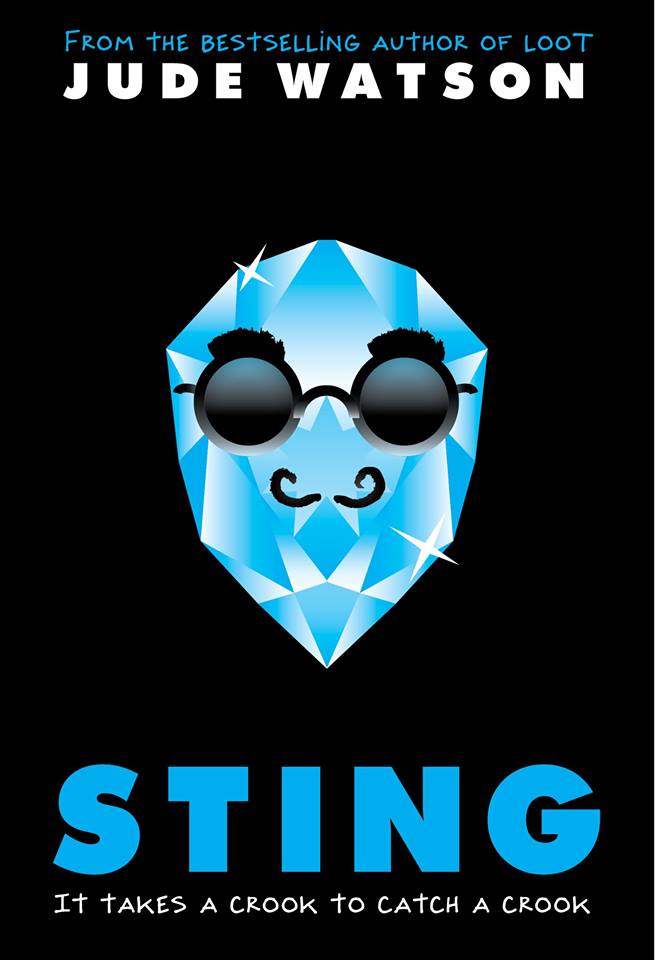 “Sting” is the fabulous sequel to “Loot,” by Jude Watson. It is perhaps especially appropriate to review this novel the day after the real-life European jewel thieves called “The Pink Panther” gang robbed Kim Kardashian of millions of dollars worth of jewelry. Watson’s story, complete with the “Top Cats” gang of thieves, shows that Watson did her homework.

Commenting on the real gang’s methods, the Daily Mail wrote: Their ruses to gain entry have included dressing as golfers, Hawaiian tourists, workmen and police officers, and for getaway vehicles they have used everything from bicycles in Tokyo to speedboats in St Tropez.

In “Sting,” the teenage thieves do indeed use a golf course (although they are not dressed as the golfers) and various vehicles for their getaways. The similarities are brilliant, and Watson keeps the reader white-knuckled. The touch of the supernatural regarding the cursed gemstones adds a bit of ghostly thrill to the plot.

The main character, March, is imaginatively created. He is brilliant, clever, and beautifully flawed. When one of the four in their “family” makes a huge mistake, March finds it hard to forgive. But in fact, March demonstrates that he is himself all-too-human. The money that was lost brought him the security he lacked as a child — but was the money more important than his friend? The story brings up the eternal question: What is more important – money or love?

The way March interacts with the other three in the group, including his twin sister, is an integral part of the plot and the heart of the story. All four have had tragic childhoods although March is slow in coming to that realization. They are tied to each other by their lack of other family and their close friendship. Watson manages to make the story a perfect mix of thrills and touching moments.

This sequel works well as a stand-alone novel, but to really enjoy it to the fullest extent, reading the first book will give the reader a greater appreciation for all the characters and the background that made them join together.

Please note: This review is based on the final, hardcover book provided by Scholastic Books for review purposes.