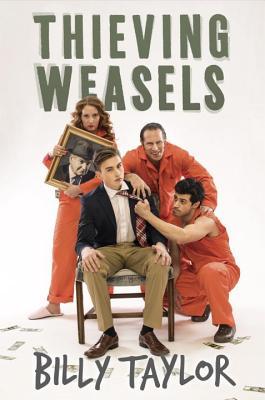 Billy Taylor’s young adult novel, “Thieving Weasels” is filled with humor, action, and lots of lies. It’s about a seventeen year old who was raised by a family of con artists. What Cam (the main character) makes painfully clear in the story is that his family was a uniquely unsuccessful group of con artists. They were, in fact, rather pathetic.

He has grown up with no stability, no sense of honor, and no pride in anything. He has learned to lie and steal and cheat, and he has learned that those abilities have been of primary importance to his family. So when he runs away from his family at thirteen and lies his way into a fancy boarding school, he decides to be the opposite of everything his family was, everything he has been taught. He learns that he likes doing things the honest way and earning the rewards that come through hard work. Cam has a girlfriend who, in spite of her wealthy background, loves him. He works hard to pay for school and has been accepted into Princeton.

Everything seems to be going Cam’s way — until his thieving family shows up and forces him to return to them, first through emotional blackmail and then through just downright old-fashioned, cruel blackmail. But Cam, whose name is really Skip, is onto their thieving ways. After all, they raised him. But can he out-con the con artists?

The plot moves quickly, and the first person narrative sounds authentic. The ending is perfect, with just enough of a twist to delight the reader. While the marketing material states that this is for ages 8 – 12, other websites list it as appropriate for grades 7 and up, or aged 12 and older. That is correct as this book contains references to drugs, drinking, and sex. It’s definitely aimed at older-than-middle-grade readers.

Please note: This review is based on the final hardcover book provided by Dial, the publisher, for review purposes.