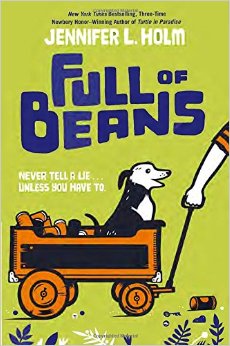 With “Full of Beans,” Jennifer L. Holm adds another entry to her collection of humorous, clever, and touching middle grade books. Beans is the colorful main character who lives with his family in Key West during the Great Depression. Beans and some of the other characters were first introduced in Holm’s award-winning “Turtle in Paradise.”

The year is 1934, and this is a Key West like no modern tourist would ever believe. Broken-down wooden shacks, rotting garbage  in the streets, bankruptcy, shysters, smugglers, and barefoot kids abound when President Franklin D. Roosevelt’s New Deal comes to town.

Men in their underwear (according to Beans who had never seen white Bermuda shorts before — apparently the rage during that time) roam the streets of Key West trying to convince the residents to donate their services to make the island touristy.

Holm captures the voice of Beans, a street-smart kid who knows that grown-ups lie — as does Beans; he lies when he needs to. But he also has a heart. When he’s desperate for money because his father can’t find work and his mother works so hard doing the laundry of others that her hands are chapped and red, he does something illegal. While he makes money from the escapade, Beans feels the weight of the misdeed and it lays heavy on his heart.

This book would be a great classroom choice for discussing “voice” and as an introduction to the Great Depression. The “Author’s Note” at the end gives nonfiction information about the history of Key West during the Depression, and “Resources to Keep the Conversation Going” has books and websites for those wanting to know more.

Please note: this review is based on the final hardcover book provided by the publisher, Random House, for review purposes.