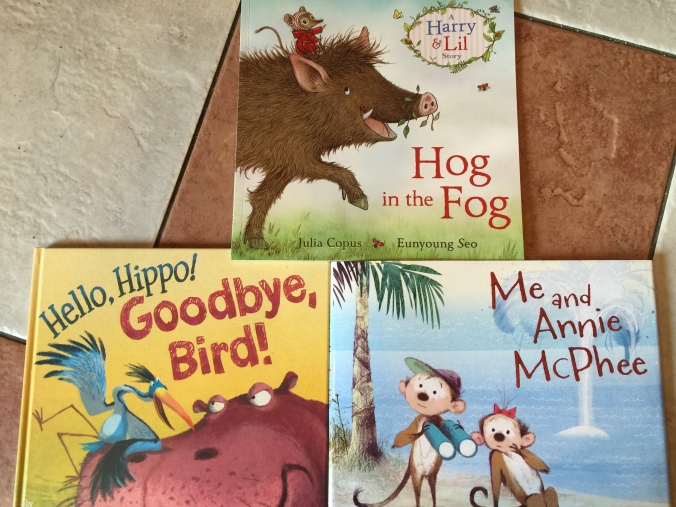 “Hog in the Fog” is the charmingly British story of Harry and Lil by Julia Copus and beautifully illustrated by Eunyoung Seo (Faber & Faber). Written in triple meter (a very pleasing rhythm), it’s the story of Lil and her friend, Harry the Hog. Harry has been invited over for tea, and when he doesn’t show up, Lil becomes worried. She sets out to look for him, and along the way she encounters several animals who haven’t exactly seen Harry, but have seen something unusual. So they all set out to look. And together, they have an adventure with a very satisfying (and tasty) conclusion. Young children will be delighted (and appalled) at what those two consider tasty treats: southern-fried lizard, earwig fudge and barnacle sludge. Yum! The illustrations are delicate and filled with the green of an English countryside.

“Hello, Hippo! Goodbye, Bird!” is a clever and brightly illustrated book by Kristyn Crow with illustrations by Poly Bernatene (Knopf Books). Bird wants to be hippo’s best friend but hippo wants none of it. Bird explains how useful it could be to have a companion who can act like an umbrella, a mustache, or a hat, and who can eat the bees who are threatening to sting hippo when he tries to steal their honey. Hippo still wants nothing to do with bird until something happens that changes his mind. Or does it? It would be interesting for children to read this story and then research the real-life relationship between hippos and the Oxpecker bird.

“Me and Annie McPhee” by Oliver Dunrea is colorfully illustrated by Will Hillenbrand (Philomel). It’s a rhyming counting book about an island inhabited by all sorts of animal creations bearing fantastical colors and wearing improbable outfits. What makes this special aside from the clever counting rhyme and tongue twisters (“…seven sleek snails sliding on shale, six black bears chomping on pears, five baby geese all named Maurice…”), are the hard-to-find hints of the next animal. It will take sharp eyes to find them. And read it more than once to see how long it takes a child to even notice that, for example, there is the nose of a sheep on the snail page.

Please note: This article is based on the picture books provided by the publisher for review purposes.