Today, I went downtown to CCPD and spoke with Commander Houston with my two kids in tow. We spoke about the dog named Geralt. He played for me the call to police that was made on July 4th. The caller explained that a gray pitbull that had been chasing children earlier was attacking another dog, you could hear another person come up and say it was their dog being attacked by the gray one. You could hear the dogs fighting on the tape and the location of the call matched the location were Geralt was picked up. He also showed me the report of investigation of Geralt running loose in his neighborhood were neighbors stated he was constantly loose and aggressively chasing neighbors to where they couldn’t leave their houses at times. He stated the owners were cited at that time and the owner was cited again when surrendering Geralt before he was EU.

Commander Houston told me he wondered why Geralt had been photographed and advertised and I told him that if I had been told any of that information, I would have never photographed or posted him.

I’m grateful the owners were cited multiple times and had I known any of this information at anytime leading up until this point, several things would have played out differently.

I hope in the future the communication between employees and volunteers that give their valuable time freely becomes clearer to avoid frustrating situations like this one.

Geralt never showed any signs of aggression with me the several times I was with him, so reading CCACS statement appeared very contradictory to me and at no time did any employee take the time to speak to me about this issue until today with Commander Houston. Geralt had always clearly been dog aggressive and now hearing the call and knowing there had been an investigation into him and his owners before ending up at CCACS again assured me that this dog sadly did not belong in general population.

Additionally, Commander Houston said that CCACS is currently working on an ordinance similar to Austin’s that would allow rescues to immediately take possession of dogs and become theirs after the three day hold period.

A dog arrived at the Corpus Christi shelter on July 4th with clear signs of having been in dog fights. This poor dog’s nose had been torn and a piece was hanging down. One eye was injured and swollen shut. He was covered in scars from old wounds and bloody new wounds on his legs. His back was missing huge patches of fur. And this dog, Geralt, was microchipped. He had been adopted from the shelter almost exactly one year ago. A picture shows the difference in Geralt’s condition in just over 12 months. 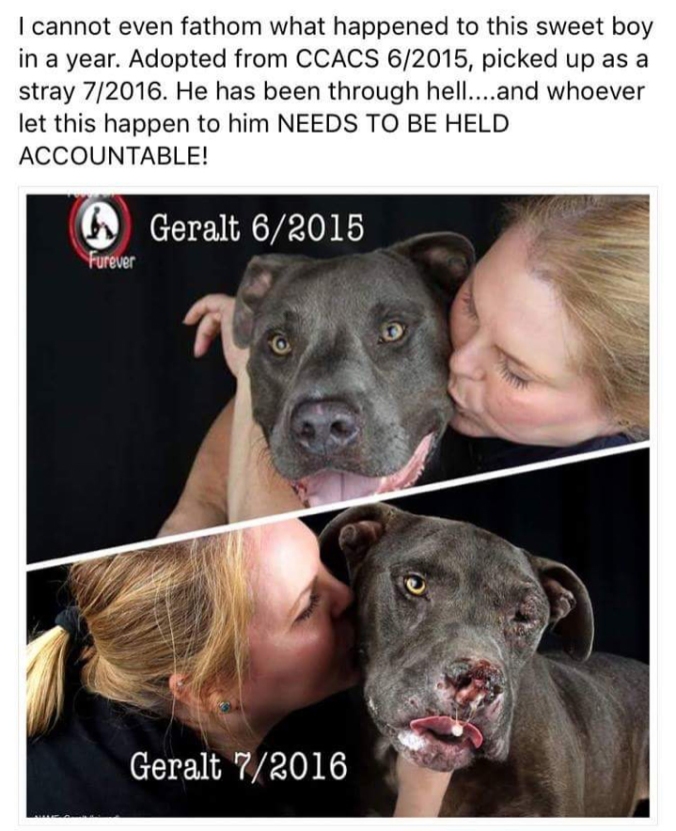 When Geralt arrived at the shelter on the 4th, it was closed. Because he was a stray, his kennel card stated that his “review date” would be July 11. That is the date on which dogs who are not reclaimed by owners can be killed. When volunteers went to the shelter  the next day on the 5th and saw him, they immediately recognized him as the dog they had fallen in love with the previous summer.

In 2015, Geralt had arrived at the shelter with a female pit bull. While Geralt was extremely dog aggressive, he got along with the female, leading those at the shelter to believe they were either a breeding pair or they lived together. When the dogs were adopted together last summer, volunteers questioned whether the adopters were really the owners of the pair. Often, rather than reclaiming stray or lost dogs, it’s cheaper to just adopt them for $25 instead of paying fines and other costs to get one’s dog back. The fact that this very dog-aggressive dog was adopted with another dog raised some suspicions, and all those suspicions came flooding back when Geralt showed up at the shelter in terrible shape.

When people recognized him as the dog they had loved last summer, they asked shelter management why an investigation hadn’t begun into Geralt’s obvious abuse. Calls flooded the shelter asking questions about Geralt and his treatment.

That’s when something strange happened. Animal rescuers in the Corpus Christi area call it a “cover-up.” Geralt had arrived at the shelter on the 4th of July, and his kennel card clearly states he was a stray. Yet a few days later, the shelter’s story changed, and they were now claiming that he was an owner surrender. That is impossible since the owner could not possibly have surrendered Geralt on the 4th. The shelter is also claiming that Geralt was not only animal aggressive, but aggressive to humans.

And that statement, according to those who spent time with him, is a lie. “They are lying; he’s not human aggressive at all,” said a volunteer who interacted with him last year and again for over an hour this year, “it’s a flat-out lie.” She went on to state, “His personality had not changed.” She had fallen in love with him last year when he was at the shelter. In fact, this volunteer described her interaction with Geralt just a few days ago.

She arrived at the shelter on July 6 with her morning coffee. When she went into Geralt’s kennel to spend some time with him, she said, “he was all over me, standing on me, kissing me, trying to drink my coffee, loving on me.” When they put him on a table and started taking pictures of him to network him, she commented that every time she asked him to sit, he’d sit and “he’d give me a big fat paw. He was such a sweet boy.” In tears, she remembered that when she put him back in the kennel, “he had himself a little hissy fit. He was crying, whining, dancing, wagging, begging with his eyes — come back!” She returned once more to see him before she left, and he was excited to see her and get some more “loving.” It was to be the last loving he would ever know. Sometime the next day the shelter killed him.

Why was Geralt killed? That’s the question hundreds of people are asking of Christopher White, the director of Corpus Christi Animal Care Services, and Chief of Police Michael Markel. Why wasn’t an investigation started? Why rush to kill a dog that was needed to serve as evidence of the abuse?

One volunteer ventured to suggest that perhaps those in charge stupidly thought that by killing him the furor would die down and disappear. Maybe they thought that without a terribly injured dog, people would stop asking questions about why there wasn’t an investigation into his abused past. 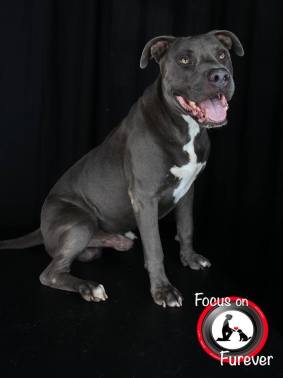 “You may see a post about a canine named Geralt on other social media pages. Geralt had a well documented history of being extremely animal aggressive and showed signs of human aggression on his last impound. Geralt was owner surrendered and found not to be a good candidate for live release due to his previous history and therefore was humanely euthanised at our facility.”

The commenters on the Facebook post do not believe that statement. Some of the comments are shown below.

Below is a close-up of Geralt’s nose when he arrived at the shelter. Somehow, his nose was torn up. Yet in spite of his horrific injuries, in the picture above he allows the volunteer to hug and kiss him. This is NOT a dog who appears to be aggressive to humans at all. Even in excruciating pain. Not aggressive at all.

If you live in the Corpus Christi area and you want answers, attend the city council meeting this Tuesday morning,  July 12. Public comments begin at noon and you can sign up to speak for three minutes.

What is especially heartbreaking about Geralt’s death is that on the day he was killed, July 7, sources say an adopter went to AC to adopt Geralt but was told he was no longer available. In addition, there was a backup adopter and an evaluator from Tyler Dexter Strong, a rescue, who was coming to evaluate him so he could be pulled by that rescue. The source said, “He had options……they didn’t have to kill him!”

Below is video taken while the volunteers were interacting with Geralt, the “human-aggressive” dog. Watch the video and see if you agree.

Those who have seen these heartbreaking pictures and the video are demanding answers. Those in charge at Corpus Christi should be prepared to give some answers.

More pictures can be seen at this Facebook thread. (Please note: all pictures were taken by Stacey Palacios, dogs handled by Barbara Brinkman, assistance by Nicola Schultz.) There is also a video of him taken on the 5th, the day after arriving at the shelter.

Please note: Only comments that are respectful and profanity-free will be published.

36 thoughts on “Cover-up in Corpus Christi? Dog killed before hold time up”