Many picture books are really aimed at older children, including these three picture books about history and important events. Each one is unique, beautifully illustrated, and perfect for the middle grade classroom.

In “Voice of Freedom: Fannie Lou Hamer (Spirit of the Civil Rights Movement),” author Carole Boston Weatherford (Candlewick Press) shares the story of a woman who was born to sharecroppers in the Mississippi Delta. From such poor beginnings, she became one of the most important women in the civil rights movement. Malcolm X called her “the country’s number one freedom-fighting woman.” Weatherford carefully researched Hamer, and the story, in first person narrative, has some lines of actual quotes in italics. Each page has a different heading. For example, under “Delta Blues” it says, “I was just six when I dragged my first bag down a row of cotton. My family — all twenty-two of us — worked in the field.” She described in painful detail what it was like to pick cotton in hundred-degree heat. The plight of the sharecropper — to be always indebted to the owner of the land — is explained. That page ends with “Sharecropping was just slavery by a gentler name.” On the page headed “Literacy Test,” she explains how a group of African-Americans went on a bus to all register to vote together. It was 1962, and during a church meeting, some young men from out of town had explained their rights. She had not even known that blacks could vote. She was not able to register, and she lost her job as a result of the effort. She describes how when blacks finally passed the test to vote, their names were published in the local paper, thereby subjecting them to further intimidation and danger.

It’s a very inspiring story, made more so by the fact that it’s real and in Fannie Lou Hamer’s own voice. It’s a perfect companion to “Steamboat School” (below).

“Miss Colfax’s Light” by Aimée Bissonette (Sleeping Bear Press) is a story of Harriet Colfax, who became a lighthouse keeper in 1861. She had moved with her brother to Indiana, and when his business folded, she was determined to stay in Indiana, where, according the author, “women could do nearly anything men could do.” Her best friend, Ann, was a schoolteacher there. The book tells how Harriet tended the lantern (first with whale oil, then with lard) each and every night. Every morning she climbed the stairs to put out the light. There were also other lanterns she had to tend — in all kinds of weather. Harriet kept a journal, and excerpts from that journal are included on the pages. She didn’t retire until the age of 80! Talk about perseverance. She is truly an example of determination for all students. 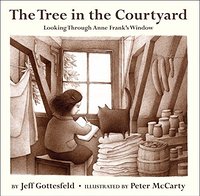 Tree in the Courtyard” by Jeff Gottesfeld and illustrated by Peter McCarty (Knopf Books for Young Readers) is an example of a picture book that crosses the line between nonfiction and fiction because of the way the story is told. The tree in the story is the horse chestnut tree that stood outside Anne Frank’s window. It’s mentioned in Anne’s diary. This story is told in third person narrative from the tree’s perspective. “The tree loved the sight of her,” and “Once, through the curtains, the tree watched the people light candles and sing.” The ending is beautiful — the tree finally dies, but “Just like the girl, she lives on.” The horse chestnut tree that animated Anne Frank had given seeds and saplings that were planted all over the world. This is a perfect book to use as an introduction to the Holocaust or a study of WWII.

“Steamboat School” by Deborah Hopkinson, a prolific writer of children’s books, and illustrated by Ron Husband, a legendary animator at Walt Disney (Disney – Hyperion), is inspired by a true story that illustrates how, in spite of discrimination and roadblocks, former slaves and freedmen were determined to get an education at any cost. It takes place in 1847, and is told from the point of view of a young boy who does not want to attend school. The school, run by Reverend John Berry Meachum, is in the basement of a church and is called the Tallow Candle School. He and the other students learned that their teacher had been a slave who worked to buy his own freedom and then bought the freedom of his parents and his wife and children. When Missouri passed a law stating that “No person shall keep any school for the instruction of negroes or mulattoes, reading or writing, in this State,” their school was closed.  Determined to continue to educate the students, the Reverend Meachum moved his school to a steamboat in the middle of the Mississippi River, which was considered federal property; thus the laws of Missouri didn’t apply. Hopkinson imagines that those who attended this school had to sneak out there since there might have been repercussions for those attending. She also notes in “Author’s Note” that Meachum’s wife was arrested after five runaway slaves who had left her home were caught crossing the Mississippi River into Illinois. Meachum himself purchased slaves and freed them, allowing them to work for him to pay him back.

All of these picture books are perfect for children from ages six through eleven. They all would be a great addition to any school or classroom library.