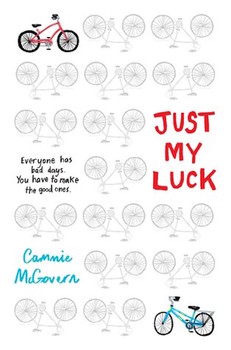 In “Just My Luck,” Cammie McGovern writes a middle grade story about a fourth-grader, Benny Barrows, who is having a really bad year. McGovern’s books are created and written to make the readers think carefully about the themes presented in the stories. Her beautifully written novels feature people who are different in some way; developmentally delayed or suffering from cerebral palsy, obsessive compulsive disorder, or autism. Her stories make people who are “different” more accessible to all of us.

Benny is the youngest child in a family with two older brothers, one of whom is autistic. George, the autistic brother, is an important character in the story. Benny’s best friend has moved away, and out of desperation, he befriends Jeremy, another boy with few friends who isn’t very likable much of the time. At least that’s how it seems to Benny, who is often the subject of Jeremy’s pointed comments.

Benny is a child who will be very familiar to teachers and those who work with students. He’s the child who wears the pink socks that were once white but got stained in the wash. He cares that the others make fun of him for it, but he doesn’t really understand why. They were originally white socks. Benny also doesn’t yet ride a bike, which is embarrassing for him now that he’s in fourth grade.

Benny’s father coaches some sports for the boys and has always encouraged Benny to participate. Benny hates sports and isn’t very good at them. He’s much more interested in making films with his minifigs (Lego people). When Benny’s father takes him to practice bike-riding and Benny bumps into his father, it causes a brain aneurysm to burst, and his father is rushed to the hospital for brain surgery. Even though Benny’s mother tells him over and over that it’s not his fault, of course that makes him believe that it is, indeed, his fault.

Benny is excited to get Mr. Norris as his fourth grade teacher. Martin, Benny’s older brother, is dating a cute and popular girl, even though he is not cute and popular. She tells Benny that Mr. Norris was her favorite teacher and gets Benny excited by telling him all the wonderful things that Mr. Norris did when she had him for fourth grade. Unfortunately, Mr. Norris has changed and is no longer a fun and exciting teacher. In fact, he falls asleep, forgets things, and doesn’t read fabulous books as expected.

There’s no magical ending to this story. Benny’s dad gets really sick and then has another aneurysm which results in another surgery. George does some surprising things over the course of the story. But mostly, McGovern writes about life when things get messy. Our lives may seem like they are going along normally, and then — wham — something tragic or horrible happens. And while that might seem like the worst luck possible, that kind of bad luck happens to almost every family.

Benny goes from doing good deeds so that he can earn a footprint for a school morale booster to learning that he does good all the time — mostly when it’s not recognized. At the end, Mr. Norris reads a short story about a woman whose baby died. She goes to Buddha and says she’ll do anything to bring her baby back to life. Buddha tells her he will do that if she brings him a mustard seed from a house that has never known death. Of course, every house has known the death of someone. That’s life — we all die. And Benny realizes that although life is very difficult at times, with the help of family and friends, it’s still beautiful.

One of Benny’s friends in the story is Olga, a girl who is legally blind and has nystagmus. So not only does the story deal with autism — a disorder that is not necessarily physically apparent, it also deals with children who look different. This would be a great read aloud for a third or fourth grade classroom. It would also be a wonderful companion text to “Out of My Mind,” by Sharon Draper.

Please note: This review is based on the final hardcover book provided by the publisher, Harper Collins, for review purposes.