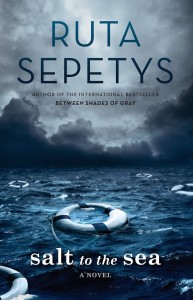 “Salt to the Sea” by Ruta Sepetys is the beautifully told story of four young people whose lives are heading toward the same destiny — a trip on the German ship the Wilhelm Gustloff. The story is told from the alternating first person narratives of the main characters. Joana, a young woman from Lithuania who was trained in Germany as a medical assistant carries with her a huge feeling of guilt from an action that is divulged late in the story. Florian is from Prussia, but worked for Hitler’s archivist taking in all the stolen art from across Europe. He carries his own secrets, and they are deadly ones.

Emilia is the one who is in the most danger since she is Polish — and Poles are one of the “defective” races according to Hitler. She has secrets of her own, and her heart is filled with bitterness. All three characters are strong and determined but quite vulnerable.

Then there is Alfred, the fourth narrator. He is quite a different character — slimy and unpleasant. At one point in the story, he is described as a “sociopath.” He views himself as a thinker, brilliant and unappreciated. His story is mostly told through his imaginary letters to a friend, Hannelore. In his imagination, he brags about his actions, his promotions, and the medals he will receive. In reality, he is the lowest-ranked sailor and despised by the others. It becomes apparent that while he was writing to his love, Hannalore, something happened. That, too, is revealed in time and is not entirely surprising.

While the story also includes other wonderful characters, it is mostly about these four and the psychological burdens each of them carries. Three of them (all except Alfred) have to prove their mettle at some point in the story, and they each comes through with flying colors.

All four people end up on the Wilhelm Gustloff, a former cruise ship that is taking German refugees to safety from the advancing Russian army. The ship was built to carry around 1,500 passengers, but because of the exigency of those leaving Germany, it carried 9,000 people, 5,000 of them children. The ship was sunk by torpedoes shot from a Russian submarine.

Sepetys researched her facts and tells the story with historical accuracy. While the four narrators are fictional, readers will feel as if they are there, in the freezing cold Prussian winter, struggling to survive. This is not a fairy tale, and do not expect a “happily ever after” ending. While very satisfying, the ending is also very touching. It’s about sacrificing for love, about finding family where you can, and about keeping one’s humanity when all around you have not.

“Salt to the Sea” is listed as appropriate for grade eight and above. While the historical part of the story would be of interest to those in middle school, note the fact that the Russians perpetrated some heinous acts on the Poles while marching through Poland. Emilia suffers as a result of those acts, and while nothing is graphic, there is much violence and despair in the story. Sepetys is also the author of “Out of the Easy.”

This review is based on the hardcover copy of the book provided by the publishers, Philomel, for review purposes.