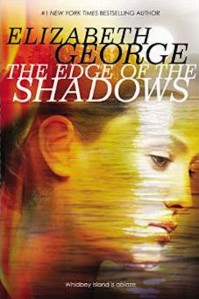 “The Edge of the Shadows” by Elizabeth George is the third book about Whidbey Island, a real island near Seattle, and a girl who took refuge there. Becca King went there after she and her mother fled from Becca’s stepfather after Becca, who can hear the thoughts of people, heard him thinking about the death of his partner. She and her mother thought that he had killed his partner, and they ran. The stepfather knew about Becca’s ability to read thoughts and had used that to fleece clients who invested with him.

Becca’s mother told her to go to a cousin on the island while her mother would go to Canada and get them set up in a new home. Then she would come back for Becca. That didn’t work out in the first book because the cousin died the night Becca arrived. She managed to eke out an existence, and by making friends she found a place to live. She has now been on the island for over a year, going to high school, and with many friends including a boyfriend.

In this story, there are a series of fires set by an arsonist. The mystery is who is setting the fires, and there are several logical suspects. True to a fine mystery, the real arsonist is unexpected. The story does not end with the third book. At the end, Becca is still waiting to hear from her mother, but as time passes she grows less convinced that her mother will return.

This story also develops Becca’s relationship with her boyfriend, a young man adopted from Africa, who has been guilt-ridden because he left his younger sister behind. Against his wishes, Becca decided to investigate what happened to his sister.

Elizabeth George continues the fine writing from the first two books, and she creates characters who are very real. Their tribulations and heartaches become the readers’ tribulation and sorrows. George deftly manages to juggle both Becca’s problems and worries with that of the other story — who is the arsonist. There are other developments with some of the side characters but it all works to make a story with a group of people that the reader will care about. Waiting for the next installment is difficult — what happened to Becca’s mother? Will her stepfather find her?

Please note: This review is based on the final hardcover book provided by the publisher, Viking Books for Young Readers, for review purposes.