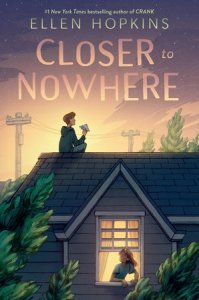 Prolific author Ellen Hopkins is known for her young adult books that deal with tough subjects — especially drugs and the horrendous damage they can do to families and the lives of those who are caught in their tantalizing web. With her first middle grade novel, Hopkins hits a home run.

This is a story that, like her other books, is written in verse. It’s written from a dual point of view. We meet and get to know both Hannah and Cal, cousins whose mothers are identical twins, but whose lives couldn’t be more different. When we first meet them, Cal has lived with Hannah and her parents for a little over a year. It’s been a tough year for all.

While both narratives are in first person, which allows us to know what Hannah and Cal are feeling and thinking, Hopkins clearly delineates who is narrating each section by beginning Cal’s narratives with “FACT OR FICTION:” and then a truth or fiction. The first one is

“FACT OR FICTION: You Can Know Where You Are and Still Be Lost”

Answer: Take it from me.

I’m Cal, and I’ve been lost
since Mom died three years ago.’

Hannah’s narrative is prefaced with definitions; for example:

“Definition of Status Quo:
The Way Things Are (Were)”

Just as Cal’s Truth or Fiction entries are related to the truths that he is about to share, Hannah’s definitions lead to understanding more of her life and how Cal’s coming to live with her family has affected it. It’s not a spoiler to say that she and her father are not happy about Cal’s being there and disrupting the “perfect” family they had before he arrived with his problems, his sadness, and his PTSD.

Cal’s life has not been a good one. While he had a loving mother, she wan’t always there for him, and after her death, his life got monumentally worse. His father has been in prison and has been addicted to drugs. He’s been violent and abusive, and he’s unstable.

At heart, Cal is a good kid. He loves to read, and that’s helped him escape from the worst of his life experiences, but sometimes he can’t take too much emotion or stimulus and his brain just explodes — or so it seems. It’s hard for those around him now, in his “temporary” family and his new school, to understand. And he worries that his father will come back to take him away from this new, better life where he gets fed daily and has a bed of his own to sleep in.

While we know that Cal is far from perfect, and we completely understand why, Hannah isn’t very likable at first. She’s had to make huge adjustments with her cousin living with them. She’s not the center of attention anymore. And her cousin can be irritating, especially since they are in the same grade at school. So she’s mean, and she admits to that flaw even as she seems a bit uncomfortable with that part of her makeup.

But both Cal and Hannah grow and change, and we feel lucky as readers that we get to experience this change and watch this growth firsthand as they share those changes with us willingly. So while parts of this book will definitely make you cry, you will also smile at the lovely passages that bespeak small movements in the relationship between Cal and Hannah. The writing is beautiful and lyrical as Hopkins uses metaphor sparingly but masterfully.

Young readers will be able to comprehend the concept of privilege when Hopkins explains that Hannah getting to take dance and gymnastics means they are privileged. Hannah argues that her father has to work really hard to afford that, and her mom responds, “But some people have to work two or even three jobs just to cover rent and food because they’re not paid very well.”

From the headings of each section to the story, from the careful use of italics to show other people talking while the narrator’s dialogue is in quotation marks, to the emotions that fill the pages, the whole book is reflective of Hopkins’ ability to craft a story that is gripping and relevant. This would be a perfect choice for a book club book for young readers and even for parents who might want to read the book and discuss it with other parents and then read it with their own kids.

It’s about families whose paths diverge, and it’s about how when families fall apart, it’s not the fault of the children – no matter how much the kids believe that it is. And it’s about how even a child with a heart of gold can suffer and be destroyed by a parent’s addiction. Tough times should bring us together, but they don’t always. At least, not often enough.

There is a fabulous discussion guide for this that parents and teachers can use to help students think more deeply about this story and the issues it raises.

Please note: This review is based on the final, hardcover book provided by the publisher, Putnam, for review purposes.