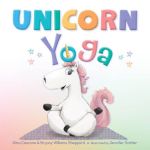 Consider the eternal and eternally wonderful unicorn — the favorite animal of thousands of children and quite a few adults I personally know. And best of all, because those lovely creatures are purely imaginary, they can be almost anything we want them to be — any shape, any size, any color (any pigment of our imaginations). Here are five adorable picture books all about that favorite of all imaginary animals. Unicorns all over the place! And each of the books has some really important things to say to our little ones, and to all us stodgy old ones, too.

“It’s Not All Rainbows,” written and illustrated by the very talented and very versatile Jennifer von Innerebner, is the story of Kevin the Unicorn, who is perfectly aware that unicorns “….bring glitter and happiness to everything around them.” That is, they are supposed to. But Kevin discovers the hard way that even a unicorn is not immune to troubles; he suffers a hilarious series of very unfortunate events, and he finds the going very difficult — well, impossible — to smile through, though he gives it his all. He falls out of bed. His car runs over a big rock. The hood pops open. A wheel falls off. There’s a long line ahead of him at the soda shop, so has to settle for clam juice. Yuck! And on and on proceeds the miserable, disgusting, lousy, very bad day. But all his trials and tribulations lead him inexorably to an important realization: nobody — human, animal, or even unicorn — can have a perfect day every day. “And that’s okay!” This is a very witty, very thoughtful, and very beautifully illustrated little fable, an enjoyable and valuable read for the young ones. (Dial Books)

“Why Can’t We Be Bestie-corns,” another lovely Kevin story written and illustrated by

Jessika von Innerebner, is the tale of two very nice and friendly unicorns; Kevin and his new neighbor, meeting for the first time, decide that they want to be best friends — Bestie-corns. But all will not be well in Bestie-corn Land. The two discover that, outside of both being unicorns, they have precious little in common. An activity one likes, the other doesn’t. A game one considers fun, the other considers boring. A sport one loves to play, the other finds impossible. How can they solve this dilemma? Their answer is simple, enlightening, logical, realistic, mature — and even pretty darn happy — though not perfect. Important lessons for everybody here! (Dial Books)

“The Return of Thelma the Unicorn,” written and lovingly illustrated by Aaron Blabey, is another extremely clever take on the unicorn myth. It’s about a certain unique — horse? Yes, Thelma is, indeed, a fake unicorn, a horse who dresses up in a unicorn costume, and as any real unicorn would, brings happiness to the whole world via her many sparkling public appearances. But Thelma gets tired of the grind, tired of the daunting responsibility of providing universal happiness, and extremely tired of the hecklers who all too often mar her appearances. So she quits. And even though she is relieved, her best friend, Otis the donkey convinces her that she owes her adoring public a return to the stage. What’s more, Otis promises that he will provide her undying support and love as she makes the rounds. Teamwork, he insists, will make all the difference. So she returns to the job she’s meant for: making people happy. And her success this second time around shows for sure that a little help from her friend can make all the difference in the world. (Scholastic Press)

The clear purpose of “Unicorn Yoga,” written by Gina Cascone and Bryony Williams 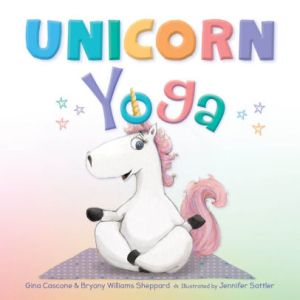 Sheppard, and illustrated by Jennifer Sattler, is to teach kids to love and value the practice of yoga. Three lovely and lovable unicorns, one blue, one pink, one white, demonstrate in words and funny pictures several yoga poses, postures, and exercises. In most cases, two of the pictured unicorns perform their exercises nearly perfectly and the third one is all messed up — but his/her poses are very entertaining nonetheless. It’s as if the creators of the picture book are saying, “See! Everybody can mess up, but this stuff is fun and healthy anyway. So give it a try! It’s a fascinating way to introduce youngsters to the multiple values and variations of the discipline of yoga. They’ll like it, and many will surely want to try it. (Sleeping Bear Press) 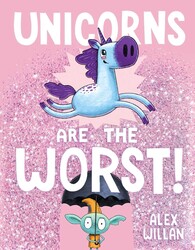 And now for the other side of the unicorn coin: “Unicorns Are the Worst,” written and illustrated by Alex Willen. Our narrator and protagonist is an unnamed but awfully cute goblin who has practiced his magical arts and spells for practically his whole life. He has felt happy and fulfilled and productive. But now, the worst possible event has befallen him: new neighbors. All of them unicorns. They play and prance and frolic and spread glitter all over everything, all the while making a whole lot of noise. So poor goblin simply cannot concentrate on his work. He decides and declares that unicorns are, indeed, the worst. But then a very large, ugly, hungry dragon appears on the scene, and it seems that Mr. Goblin will soon be dragon fodder. But don’t forget — unicorns are not just pretty prancing playthings. They have horns and hooves, and sometimes some pretty bad but very helpful tempers. So you can guess who saves our narrator and hero from the dragon’s evil clutches (and teeth!). Finally, he realizes that “….unicorns aren’t THAT bad.” As a matter of fact, they make terrific friends. But “DRAGONS are the WORST!” (Simon & Schuster Books for Young Readers)