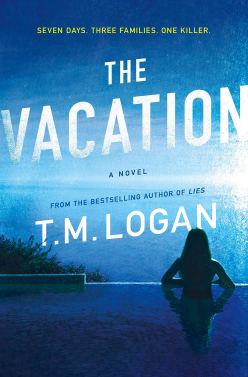 Almost all of us have taken long-planned vacations that turned out to be much less enjoyable than we had hoped. But this T.M. Logan novel,”The Vacation,” takes us on a trip so filled with gloom, anger, profound disappointment, paranoia, and near-madness that we might ourselves avoiding future vacations for fear that they might be anything at all like the one Logan describes so vividly in this excellent mystery novel.

There are twelve characters in the story, each of them bearing ugly scars, secrets, and deeply hidden problems primarily due to past misdeeds. Four of the characters are forty-year-old women who have been best friends since college but have rarely communicated for ten years. They love each other. But they have all hurt each other in the past, and those hurts and harms and horrors are slowly and painfully forced back into their memories and revealed to us as the story proceeds. Their husbands and children comprise the rest of the cast, and all of them are similarly troubled. So a lovely vacation at a mansion in a small French town becomes an ugly portrait of suspicion, fear, and, yes, loathing.

Kate, the only character who is a first-person narrator, is the sort-of main character, but the author does a terrific job of developing, in detail and depth, the tortured lives of each of the others. The main plot — although there are several almost equally important sub-plots — involves Kate’s obsessively paranoid suspicion that her husband is having an affair with one of the other women. And as the plot unfolds, details emerge which seem to her to indicate that first one, then another, and then the other is the culprit who has stolen her husband. The suspense grows exponentially; every scene becomes darker than the previous one while the threat of violence seems more and more inevitable as love turns into hatred, fear turns into horror, anger turns into open conflict, and hopes for happiness turn into dread and destruction — and the benign hills and valleys of youthful innocence devolve into the malignant mountains and chasms of guilt-fueled adolescence and adulthood. And if you’re wondering why those metaphors are entirely relevant to the plot, read the book —  the whole book.

Meanwhile, the end of each chapter, along with the end of the entire novel, becomes a virtual — and literal — cliffhanger as we anxiously await the next tragic event. The conclusion then effectively ties together all the plot threads, all the character entanglements, and all the crashing climaxes.

Finally, those superbly conceived ingredients of suspense and surprise add up to a  sumptuous set of several heart-stopping multiple climaxes as all the mysteries are solved and all our questions are answered. And, to be sure, all those ingredients also add up to another fine piece of emotion- and thought-provoking mystery that lovers of the genre will happily and greedily consume.