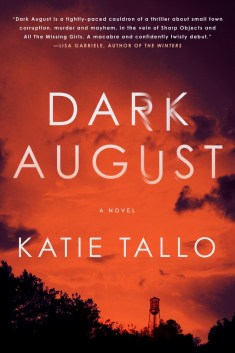 August is a month filled with the afternoon sounds of cicadas indicating that summer is almost over, and in “Dark August,” Katie Tallo fills us with so much darkness, tragedy, and despair that there are no sunny summer days and beautiful summer nights at all.

The story starts slowly. And the Gus (Augusta) Monet we meet is not a very likable character. She’s living in cheap motels with a thug named Lars. She allows him to abuse and threaten her. And she has no aspirations at all. None.

But as we get to know Gus, we find out why she’s drifting through life with no anchor and no family. When she gets a call that her great grandmother has died, she goes back to the house she never got to live in. After Gus’s mother died when Gus was eight years old, her great grandmother sent her to live in a boarding school, and there she stayed, year after year. When she graduated high school, she hadn’t had contact with her last living relative, her great grandmother Rose, for years. So she ends up alone and easy prey for a minor criminal like Lars.

But when Rose’s caretaker calls and tells Gus to come home, she sneaks out and leaves Lars without a word. She arrives at Rose’s house, and there is Levi, the dog that her mother had gotten her over a decade prior, happy to see her. We learn that Levi was never her dog, and she really doesn’t want him now either. (As I said, Gus isn’t a very likable person when we first meet her.)

But as the story progresses, so does Gus’s character. She learns about what her mother had been investigating just before her death. She learns how her mother became obsessed with the town of Elgin, Ontario. The whole town burned in a conflagration that incredibly killed only four people because everyone happened to be outside of town at an event. Kep Halladay, the focus of her mother’s investigation, was wealthy beyond belief. He had gotten local farmers to sign over their mineral rights just before shale (oil) was found in the land. He became even wealthier, and the fracking eventually led to the destruction of the town.

As Gus delves into the clues her mother left her about the investigation, she is hindered by Rory, her parents’ best friend from the police force, who thinks she should leave the investigation alone. As she delves deeper and deeper into the mysteries of the past, as well as the disappearance of Kep Halladay, she realizes that there are still those who are very interested in finding out what she knows, and they will go to any lengths to stop her. How important is it to solve the mystery of her mother’s death and her mother’s investigation? Is it worth her life?

We end up adoring Gus for her tenacity and her ability to change. She ends up loving Levi, the faithful and protective mutt whose life she wasn’t a part of for so long. She learns whom she can trust, and she learns that betrayal can last for decades and can have a familiar face.

Once you’ve started reading, you will find it difficult to stop. The manner in which Tallo puts all the pieces together and tantalizes us with clues is clever and masterful. At times, it’s difficult to know if we are in Gus’s present or in her past, when she is reliving the night of her mother’s death. Was she there or not? If she was found safe in her bed that night, why does she remember being there?

Read “Dark August” and be prepared to enter a world of death, devastation, and danger — but with enough love and devotion to make the ending immensely satisfying.

Please note: This review is based on the final, paperback book provided by Harper, the publisher, for review purposes.