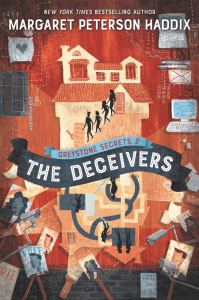 Margaret Peterson Haddix is truly the queen of series writing. It’s tough to write a second book in a series that has more than two books. You can’t write the ending, but there needs to be some kind of closure, and yet you have to make sure that the readers are involved enough to want to know what’s going to happen next. Haddix manages it all brilliantly.

In the first book, “The Strangers,” Haddix creates an alternate world with two families who are thrown into chaos when the worlds collide. The main characters are the children from two families, the Greystone children: Finn, the youngest of the family is only eight years old, but he’s brave and thoughtful. Emma is ten, and she’s a genius at solving problems. In this second book “The Deceivers,” she’s determined to solve the mystery of their mother’s letter to them, written in code. And there’s Chess, the oldest at 12, who remembers the most about their life when their father was alive, and he is the most emotional. Natalie is the daughter of a woman who was also trapped in the alternate world in the first book, and she convinced her father that the Greystone kids should live with them. She’s working with the three kids to get their moms back. Natalie is thirteen and beautiful, and Chess has a huge crush on her. In the first book, “The Strangers,” the ending is a cliffhanger. The cliffhanger is resolved in this second book, and there is closure of a sort at the end of this book, but the intrigue goes on as the Greystone children, along with Natalie, decide that they must help those in the alternate world.

Younger readers may not see parallels to our current situation, but older readers and certainly adults reading these books will see a scarily similar situation to the alternate world where it’s against the law to tell the truth and a totalitarian government rules everything. Yet readers find out in this second book that things are not always as they appear. People who in the first book seemed nothing short of evil are really different. And we even see that those who once did value power and prestige over everything may have changed and seen it’s better to do what’s right.

Right and wrong, secret codes that must be broken, danger, not knowing who to trust even when they look just like trusted people in your world, and even the power of a young mind that unwittingly is able to help decipher codes all make this an action-packed, thrilling read. Make sure to read the first book in the series, “The Strangers,” and the thrilling conclusion, “The Messengers.”

Please note: This review is based on the final, hardcover book provided by Katherine Tegen Books, for review purposes.