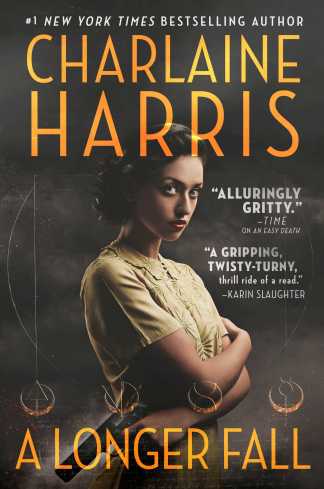 “A Longer Fall” is the second novel in Charlaine Harris’ new series “Gunnie Rose,” about Lizbeth Rose, a “gunnie,” in a dystopian world where the United States is broken up into various new countries including Texoma, a combination of Texas and Oklahoma, where Lizbeth lives.

The story begins after Lizbeth, a sharpshooter who works protecting people or property, has recovered from her adventure in the first book. She’s on a train with a new crew, and this time she’s a hired gun helping to protect a mysterious crate that is on its way to Dixie, the country that used to be the Southern part of the United States, and where things have regressed in terms of how women and minorities are treated. When they are close to Dixie, there is an explosion, and the train derails. Some of the crew are killed outright while others are killed during the gunfight when robbers break into the train to steal the crate. During the aftermath of the train wreck, the crew’s boss, Jake, is murdered and the crate is stolen.

Eli Savarov, Lizbeth’s employer and lover from the first book, makes an appearance. He, too, is in search of the crate and hires her to help him. Because of the different mores in Dixie, Lizbeth is forced to put aside her jeans and boots and wear  “womanly” outfits, which Eli purchases at a local store. Eli is a Russian magician, or grigori, and he is one of the few people who know that Lizbeth’s father was also a grigori. They pretend to be married so that they can share a room at the local hotel as they try to locate the stolen crate.

The crate was sent to Dixie in hopes that the contents would help the blacks there change their lives and their status as second-class citizens. Because while they are not slaves, they are treated poorly, and their lives are forfeit for even minor transgressions.

Much of the story is about Lizbeth and Eli’s search for the missing crate and those who would stop them. There is a lot of action as both must constantly be aware of their surroundings and those who would kill them to prevent them from succeeding in their goal. Harris also moves the relationship between Eli and Lizbeth forward as they pretend to be married, with all that that entails, during their stay. It’s apparent that Eli is not a character who will disappear in this intriguing series.

Much of the story is plot-driven, with a lot of dialogue to move the action forward. Harris gives Lizbeth a folksy way of talking, and she veers from speaking correctly — especially around her mother, a school teacher — to using colloquial language much of the time. At times, the changes in how Lizbeth speaks can be jarring as she uses incorrect grammar one minute and then shows a penchant for robust vocabulary in the next. For example, on one page Lizbeth says in her folksy voice to Eli, “Me and him’s going to have a talk real soon.” On the next page as she narrates an exchange she has with her mother about how Eli is not like her father, Oleg Karkarov, who raped her mother, she says, “My father. Whom I’d killed.” Not many “regular” people, even college educated people, use “whom” correctly. Readers, perhaps, may accept those kinds of language disconnects as part of the charm of the story. Other readers may find them distracting.

Fans who enjoy Harris’ ability to incorporate fantasy into the action stories will enjoy the magic that Eli and the other grigoris use and especially how that magic protects them, as compared to how Lizbeth and her superb ability with her guns protects Eli and their friends. All-in-all, fascinating and unique combinations of action and fantasy.

This review was originally published at Bookreporter.com.

Please note: This review is based on the advance reader’s edition provided by Saga Press, the publisher, for review purposes.