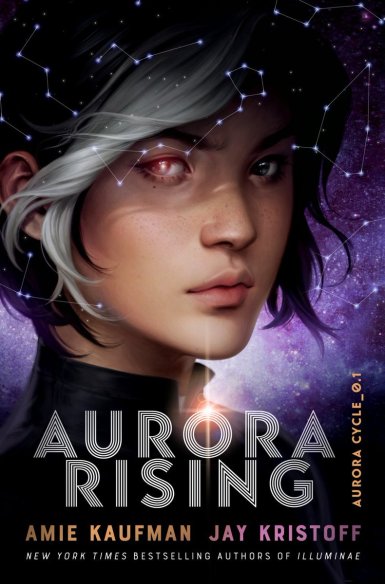 In “Aurora Rising,” authors Amie Kaufman and Jay Kristoff take readers into the future, the year 2380, and into an adventure that spans centuries. From the first chapter, readers know that Tyler, one of the main characters, is a worthy leader. He rescues Aurora from a ship that has lain rotting for two centuries and takes her to safety. Unfortunately, by doing so, he has jeopardized his number one standing as a cadet and forfeited his first draft choice for his team. Instead, he gets the leftovers whom nobody wanted in addition to his twin sister Scarlett and their best friend, Cat.

The others are all those who were shunned. Finian, an alien who has physical disabilities but is a tech whiz; Zila, who may be human but doesn’t always understand emotions, always acting based on reasoning and intellect alone; and Kal, the alien whose whole raison d’etre is to fight and kill.

Then there is Aurora Jie-Lin O’Malley. She’s the girl who survived two hundred years in cryo-sleep and is now a stowaway on their ship. They are off on what appears to be a mundane delivery, but they quickly realize that appearances are misleading, especially after violence seems to follow them everywhere they go.

Aurora is also not what she appears to be — a simple human teenager whose ship was lost on her way to a colony named Octavia III, where her father was living. In fact, according to current information, Octavia III was never a colony, and her ship was heading to a different colony altogether.

Why has the existence of Octavia III been hidden? Why can Aurora do impossible things when there is an urgent need? And how is it possible that a mismatched crew can work together against impossible odds to stay alive even while being pursued by much more powerful forces?

Please note: This review is based on the final, hardcover book provided by Knopf Books for Young Readers, the publisher, for review purposes.