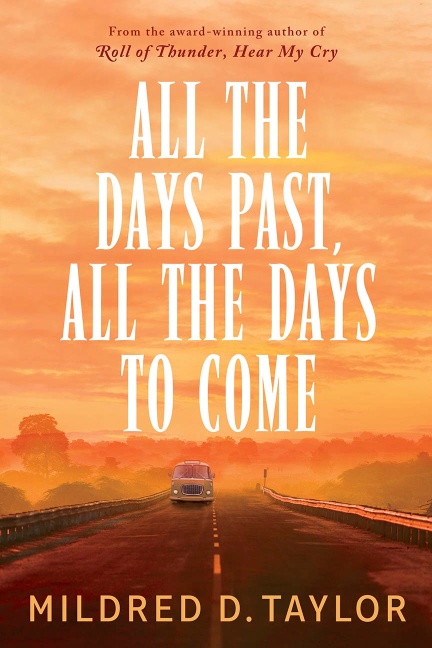 “All the Days Past, All the Days to Come” is Mildred D. Taylor’s tenth book about the Logan family of Mississippi and their struggle from the 1930s on trying to protect their land and their family from the bigotry, prejudice and violence that they endured living in the Deep South. Readers who know Taylor’s body of work will be thrilled to read about what happens to the family, especially Cassie, as they grow up. New readers will get the pleasure of learning about life in the Logan family. The Logan family, really Taylor’s family, consists of a special group of people. They are raised to be people of integrity with an ingrained sense of their self-worth. Yet they are also taught to be smart in how they behave in their home in the South during times when a simple statement or wrong move could invite harsh retaliation from whites.

Several of Taylor’s novels are narrated by Cassie, the only girl among the Logan family children. In this novel, Cassie narrates her life as an adult, through college, law school, and the Civil Rights era. As Cassie relates the Logan stories as well as her own story, past readers will remember the plot from the book “The Friendship” about Mr. Tom Bee, who refused to address the white store owner, John Wallace, as “Mister,” based on a promise that Wallace had made him when Mr. Tom Bee saved his life. “Mississippi Bridge” is also recounted in this novel, an ironic story about a time when blacks wanting to ride a bus were kicked off to make room for white passengers. That racist act saved their lives when the bus skidded off a slick bridge and into a raging river during a storm, and many on the bus drowned.

“All the Days Past, All the Days to Come” is Taylor’s longest novel at almost 500 pages and certainly her most ambitious. It’s not a story about a single moment in time as are many of her other novels but rather about a broad sweep of history. We begin as Cassie’s brothers are called up to serve in the military during WWII. They are bitter that while they don’t have the same rights as white men, they have to fight for those who deny them the right to equality.

They return from the war to a country that hasn’t changed. The Logan children, now adults, move to Toledo for a better life. While their parents and Big Ma stay in Mississippi to work the land — the precious land that their family has sacrificed so much for — they build successful lives in the North. The family gathers in Mississippi every summer, and that’s how the family’s stories are shared to the next generation. In fact, all of these stories are based on stories that Taylor heard in her childhood from her father and her grandparents. In this book, we get to “meet” Taylor and realize who she is in the family.

Cassie takes readers on a journey literally from one coast to the other as she tries to find a place where she is judged on the person she is inside instead of the color of her skin. Spoiler alert: At no time in the story does that ever really happen.

Taylor doesn’t demonize all white people in her stories. Rather, she tells the ugly truth about the state of racism in our country. There were white people who sympathized and helped the black people when they could, but they were few and far between. And in the north, in the west, in California, Taylor points out through Cassie’s experiences that while there were no “Whites only” signs on bathroom doors, drinking fountains, and in restaurants, the rules were unspoken and still humiliating to the blacks who pushed boundaries. Some of the events in this novel will rip the guts out of readers who see the same thing happening to this very day.

No matter how much the residents in the Logans’ Mississippi hometown studied the Constitution and laws, they were never permitted to register to vote (the timeline of the book goes through 1963). People who defended themselves, tried to register voters, tried to register to vote themselves, took the very real risk of being killed. And even when they defied the dangers and tried, they were not allowed to register to vote. We see the same voter suppression going on now although the method is more subtle. Instead of a Southern white registrar denying someone the opportunity to vote, wide swaths of minority voters are purged from the voting lists, sometimes hundreds of thousands at a time. Instead of a white registrar making voters recite arbitrary passages from the Constitution, potential voters of color are required to have certain kinds of identification or to register in inconvenient locations and during hours that would require them to take time off from work, which is a hardship for many.

While the other Taylor books are aimed at middle grade students, this novel is primarily aimed at teen-aged readers. Adults reading it will not be disappointed, though, or feel in any way that the writing is “below” them. All of the chapters provide readers of every age with clarity regarding what it was like to grow up in a time when being an African-American virtually guaranteed the denial of equal rights.

Even now, studies indicate that African-American children in school are often disciplined more harshly than their white counterparts, and often discrimination at large companies simply goes unchecked. In fact, during a recent conversation with the black mother of two of my students, I commented that currently it’s shocking to see, out in the open, all the Americans who are still haters and bigots. She replied, “It’s not shocking to us.” And doesn’t that say it all?

Teachers need to use diverse books when teaching. For the past 20 years, I’ve been using Mildred D. Taylor’s books to do just that. “Roll of Thunder, Hear My Cry” and “Let the Circle Be Unbroken” are full length novels suitable for fifth graders and middle school readers. But her shorter books, really novellas, like “The Friendship,” “The Well,” “The Gold Cadillac,” “Mississippi Bridge” and “Song of the Trees” are all excellent teaching tools to educate children about discrimination and bigotry. It might help them understand why, for example, it’s important that police officers are finally being held accountable for unjust killings. The police officer who recently killed a woman in her own home after a neighbor called for a well-being check because her front door was open is a prime example. He was eventually charged with murder. In the past, as Taylor amply shows in her fiction, there was simply no accountability for the killing of black people. Has it really taken this long for that sad reality to be at least partially ameliorated? Apparently.

“All the Days Past, All the Days to Come” would be a superb choice for middle school or high school students. In spite of its length, Taylor’s writing makes the pages turn quickly as readers want to know about Cassie’s life and what happens next. I hope my students who have read and discussed Taylor’s shorter books will also read this one. It’s certainly the next chapter in the Logan family’s life, but it’s also a wonderful, gripping, heartbreaking — yet also heartwarming — story.

Other books for middle grade readers on this subject include “Night on Fire,” about the town of Anniston and the Freedom Riders who were attacked there, “Stella by Starlight,” which takes place in 1932 and is based on author Sharon Draper’s grandmother’s diary and  the repercussions for African-Americans when they tried to register to vote, “Running Out of Night,” about an escaped slave in 1858, and “Brown Girl Dreaming,” a memoir by Jacqueline Woodson.

Please note: This review is based on the advance reader’s copy provided by Viking, the publisher, for review purposes.